Researchers at the University of Helsinki, Finland, believe they have discovered stem cells that play a decisive role in new blood vessel growth. If researchers learn to isolate and efficiently produce these stem cells found in blood vessel walls, the cells offer new opportunities in the treatment of cardiovascular diseases, cancer and many other diseases. The study will be published in the PLOS Biology journal on 16 October 2012.

The growth of new blood vessels, also known as angiogenesis, is needed in adults when repairing damaged tissue or organs. Unfortunately, malignant tumours are also capable of growing new blood vessels to receive oxygen and nutrients. In other words, the treatment of diseases would benefit from two types of methods: ones that help launch the process of angiogenesis and ones that make it possible to prevent the process. Medications that prevent the growth of new blood vessels have already been introduced, but their effectiveness and long-term efficacy leave much to be desired.

For more than a decade, Adjunct Professor Petri Salvén from the University of Helsinki has studied the mechanisms of angiogenesis to discover how blood vessel growth could be prevented or accelerated effectively. He has examined the birth and origin of endothelial cells, which form the thin layer that lines the interior surface of blood vessels. Endothelial cells are necessary for new blood vessel growth. Where do these highly diversified cells come from? Can their production be prevented or increased?

For a long time, it was assumed that new cells in the blood vessel walls of an adult originate in the bone marrow. In an article published in the PNAS journal in 2008, Salvén's research team showed that such stem cells were not found in bone marrow.

Now Salvén is ready to reveal where these mysterious stem cells originate. His team's new study will be published in the PLOS Biology journal on 16 October 2012.

"We succeeded in isolating endothelial cells with a high rate of division in the blood vessel walls of mice. We found these same cells in human blood vessels and blood vessels growing in malignant tumours in humans. These cells are known as vascular endothelial stem cells, abbreviated as VESC. In a cell culture, one such cell is able to produce tens of millions of new blood vessel wall cells," Salvén explains.

"Our study shows that these important stem cells can be found as single cells among ordinary endothelial cells in blood vessel walls. When the process of angiogenesis is launched, these cells begin to produce new blood vessel wall cells."

Identifying stem cells among other blood vessel wall cells is challenging and time-consuming. Salvén and his team managed to identify a few molecular surface structures that make it easier to trace these stem cells. However, the efficiency of the identification process needs to be enhanced.

"If we can find more molecules that are characteristic of the surface structure of these rare cells, it is possible that we can increase the efficiency and accuracy of the cell isolation process by more than tenfold. This would enable numbers that are sufficient for cell transplant treatments for humans," says Salvén.

"The identification and isolation of an entirely new adult stem cell type is a significant discovery in stem cell biology. Endothelial stem cells in blood vessels are particularly interesting, because they offer great potential for applications in practical medicine and the treatment of patients," says Salvén. 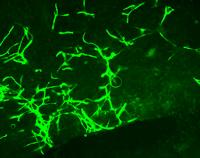 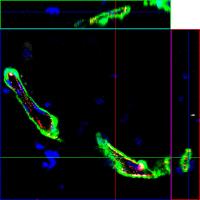