A research team of fusion scientists succeeded in proving that ions can be heated by plasma oscillations driven by high-energy particles. This has been confirmed by performing a large-scale simulation with a newly developed hybrid-simulation program that links calculations for plasma oscillations, high-energy particles and ions. This research will accelerate studies of plasma self-heating for realizing fusion energy.

The fusion reaction between deuterium ion and tritium ion in a high-temperature plasma will be used in fusion reactors in the future. The high-energy alpha particles generated by the fusion reaction give their energy to the plasma, and this plasma self-heating maintains the high-temperature condition required for the fusion reaction. However, we have the problem that the heating of fuel ions is weak because the high-energy particles give most of their energy to electrons through collisions with the electrons. In order to increase the ion heating rate, it is proposed that ions can be heated by the plasma oscillations driven by the high-energy particles. However, this ion heating mechanism has not yet been confirmed.

Professor Todo previously developed a computer program that can simultaneously simulate the state of the plasma as a whole, which is treated as fluid, and the movement of high-energy particles in a plasma. This program, because it links and calculates the fluid and the particles, is called the hybrid-simulation program. It enables us to study the interaction between the plasma oscillations and the high-energy particles. The program is highly evaluated among fusion scientists, and several simulation studies using the program are now ongoing.

Thus, the research team has proved the ion heating by plasma oscillations for the first time in the world. On the basis of the results of this study, the research on self-heating plasma for realizing fusion energy will be accelerated.

This research result was published as Wang, et al. "Simulation of energetic particle driven geodesic acoustic modes and the energy channeling in the Large Helical Device plasmas" in Nuclear Fusion in August 2019. This research was funded by the Grant-in-Aid for Scientific Research from JSPS (15K06652, 18K13529, 18H01202). 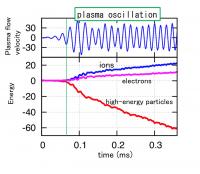