In Senegal, groundnut and maize are commonly contaminated with highly toxic, cancer-causing chemicals called aflatoxins, which are produced by fungi in the genus Aspergillus when they infect crops. The main aflatoxin-producing species is A. flavus. This contamination typically occurs before harvest and can worsen depending on storage conditions. Consumption of these crops when containing high aflatoxin levels can result in rapid death.

However, not all Aspergillus flavus produce aflatoxins--about 20% of the species are non-toxin producing and known as atoxigenic. Atoxigenic isolates can be used as biocontrol agents to reduce aflatoxin content in crops when they are applied before crop flowering. The isolates then reproduce and become dominant in the fungal populations of treated fields, reducing the amount of aflatoxin-producers. Aflatoxin biocontrol products containing atoxigenic A. flavus isolates have been developed for use in the United States, Italy and several African countries.

Recently a team of plant pathologists have developed an aflatoxin biocontrol product, Aflasafe SN01, for use in Senegal, which includes four atoxigenic isolates native to Senegal and distinct from active ingredients used in other biocontrol products in Africa and elsewhere. Tests conducted in important crop production areas of Senegal for 5 years in more than 500 fields found that this product is highly efficient in reducing aflatoxin contamination in groundnut and maize.

"Based on the large volume of data systematically generated over 5 years from more than 500 trials conducted on smallholder farms, the article leaves no doubt that Aflasafe SN01 is extremely effective in hot, drought-prone areas even under difficult farming conditions across Senegal," says scientist Ranajit Bandyopadhyay. "Large-scale use of Aflasafe SN01 should provide health, trade, and economic benefits for Senegal."

This is an important advancement as aflatoxin contamination is a serious problem in Senegal and the neighboring The Gambia. Medical professionals have linked aflatoxin contamination with liver cancer. It has also been shown to interfere with immunity and is associated with stunting in children. Additionally, the contamination has devastating economic effects on Senegal, which produced a quarter of the world's groundnut exports in the 1960s but only one percent in 2013.

According to Bandyopadhyay, the most surprising element of this research was the high effectiveness of the multi-strain product in trials completely managed by resource-poor smallholder farmers and eagerness of public- and private-sector stakeholders to adopt the technology.

"Thousands of farmers in Senegal and The Gambia now use Aflasafe SN01 to reduce the aflatoxin burden in their groundnut and maize crops."

This research, published in the February issue of Plant Disease, is a component of the Africa-wide Aflasafe initiative, which develops and implements aflatoxin management strategies centered on the biocontrol technology. As of now, 14 Aflasafe products have been developed and registered for use in 10 African nations, with development in progress for 10 other nations.

For more information about this study, read "The Atoxigenic Biocontrol Product Aflasafe SN01 Is a Valuable Tool to Mitigate Aflatoxin Contamination of Both Maize and Groundnut Cultivated in Senegal." 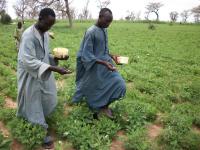