Worldwide, around 60 per cent of the 500 known primate species are threatened with extinction. Primates live in tropical and subtropical areas and are mainly found in regions of Africa, South America, Madagascar and Asia. However, the extinction of a species must be considered a global problem. An international research team that includes two scientists from the German Primate Center - Leibniz Institute for Primate Research, evaluated the economic, social, cultural, ecological and scientific importance of primates and the global consequences of species extinctions. They call for a strengthening of awareness and a rethinking of the impending extinction events. In order to protect primates, immediate action must be focused on conservation and sustainability (Science Advances).

Golden snub-nosed monkey, ring-tailed lemur, Javan slow loris, Azara's night monkey - we still have a large diversity of primates. They are an essential part of tropical biodiversity, contribute to natural regeneration and thus to the functioning of tropical habitats and are an integral part of many cultures and religions. Worldwide, more than half of all primate species are threatened with extinction. In order to evaluate the role of human-induced threats to primate survival, the researchers combined data from the International Red List of the world nature conservation organization International Union for the Conservation of Nature (IUCN) with data from the United Nations (UN) database. This enabled the scientists to establish forecasts and development trends for the next 50 years. For the next 50 years the scientists predict extinction events for many primate species. "Humans increasingly encroach primate habitats and exploit natural resources," explains Christian Roos, a scientist at the German Primate Center (DPZ) and a co-author of the study.

The natural habitat of primates is mostly found in regions with high levels of poverty and a lack of education. These conditions lead to the exploitation of natural resources. Deforestation for agricultural land-use has become widespread. Road networks are built for the transportation and the export of goods. Around 76 per cent of the species have lost large parts of their habitat because of agricultural expansion. Another major threat is illegal hunting and the primate trade. In some regions, up to 90 per cent of species are affected. Immediate action in these regions should be aimed at improving health and providing access to education for the local populations. In order to preserve the traditional livelihoods that will contribute to food security and environmental protection, sustainable land-use initiatives must be developed. "The lifestyle and the economy in the industrialized countries contribute to the threat for primates. Many of the resources and products such as mineral resources, beef, palm oil and soya that are destroying the habitats of primates are ultimately consumed in industrialized countries," says Eckhard W. Heymann, a scientist at the DPZ and a co-author of the study.

The team of experts calls on government officials, academics, international organizations, non-governmental organizations, the business community and citizens to strengthen the awareness of the extinction events and the immediate consequences for humans. "Conservation is an ecological, cultural and social necessity. When our closest relatives, the non-human primates, become extinct, this will send a warning signal that the living conditions for humans will soon deteriorate dramatically," says Heymann.

Global threat to primates concerns us all 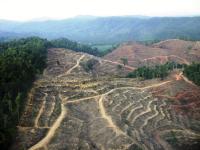