Field studies have shown for the first time that several common species of seaweeds in both the Pacific and Caribbean Oceans can kill corals upon contact using chemical means.

While competition between seaweed and coral is just one of many factors affecting the decline of coral reefs worldwide, this chemical threat may provide a serious setback to efforts aimed at repopulating damaged reefs. Seaweeds are normally kept in check by herbivorous fish, but in many areas overfishing has reduced the populations of these plant-consumers, allowing seaweeds to overpopulate coral reefs.

A study documenting the chemical effects of seaweeds on corals was scheduled to be published May 10, 2010 in the early edition of the journal Proceedings of the National Academy of Sciences (PNAS). The research was supported by the National Institutes of Health, the National Science Foundation, and the Teasely Endowments at the Georgia Institute of Technology.

"Between 40 and 70 percent of the seaweeds we studied killed corals," said Mark Hay, a professor in the School of Biology at Georgia Tech. "We don't know how significant this is compared to other problems affecting coral, but we know this is a growing problem. For reefs that have been battered by human use or overfishing, the presence of seaweeds may prevent natural recovery from happening at all."

Coral reefs are declining worldwide, and scientists studying the problem had suspected that proliferation of seaweed was part of the cause – perhaps by crowding out the coral or by damaging it physically.

Using racks of coral being transplanted as part of repopulation efforts, Hay and graduate student Douglas Rasher compared the fate of corals from two different species when they were placed next to different types of seaweed common around Fijian reefs in the Pacific – and Panamanian reefs in Caribbean. They planted the seaweeds next to coral being transplanted – and also placed plastic plants next to some of the coral to simulate the effects of shading and mechanical damage. Other coral in the racks had neither seaweeds nor plastic plants near them.

To confirm that chemical factors were responsible, Hay and Rasher extracted chemicals from the seaweeds – and from only the surfaces of the seaweeds. They then applied both types of chemicals to corals by placing the chemicals into gel matrix bound to a strip of window screen, forming something similar to a gauze bandage and applying that directly to the corals. To a control group of corals, they applied the gel and screen without the seaweed chemicals.

The effects confirmed that chemicals from both the surface of certain seaweeds and extracts from those entire plants killed corals.

"In all cases where the coral had been harmed, the chemistry appeared to be responsible for it," said Hay. "The evolutionary reasons why the seaweeds have these compounds are not known. It may be that these compounds protect the seaweeds against microbial infection, or that they help compete with other seaweeds. But it's clear now that they also harm the corals, either by killing them or suppressing their growth."

The researchers studied coral of different species in the Pacific and Caribbean, matching them up against different species of seaweed common to their geographic areas. The coral species chosen – Porites porites in Panama and Porites cylindrica in Fiji – are among the hardiest of coral, suggesting that other species may be even more dramatically affected by the seaweed compounds.

The harmful chemicals affect only coral in direct contact with the seaweed, suggesting the compounds are not soluble in water, Hay noted. The effects – which were measured through photographic image analysis and Pulse-Amplitude-Modulated fluorometry – also varied considerably, with certain seaweeds showing stronger impacts than others.

Conducted during 2008 and 2009, the study adds new information about the decline of reefs worldwide, and reinforces the importance of maintaining a healthy ecosystem that includes enough herbivorous fish to keep seaweed under control.

"Removing the herbivorous fishes really sets up a cascade of effects," said Hay, who holds the Harry and Linda Teasely Chair in the Georgia Tech School of Biology. "The more you fish, the more seaweeds there are. The more seaweeds there are, the more damage is done to the coral. The less coral there is, the fewer fish will be recruited to an area. If there are fewer fish, the seaweeds outgrow the coral. It's a downward death spiral that may be difficult to recover from."

In earlier research, Hay and other researchers demonstrated that keeping fish away from coral reefs fuels the growth of seaweeds, and that certain fish are responsible for eating specific seaweed species. That information could help guide fisheries management by encouraging protection of fish that control the most harmful seaweeds.

"The most damaging seaweed in our study is eaten voraciously by one species of fish, and no other species will touch it," Hay said. "Now that we know that seaweeds can kill coral through these chemical means, it is even more important to understand which herbivores control which seaweeds so we can consider additional protections for these critical fish species, even outside of normal marine protected areas." 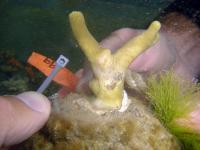