Dust storms are often defined as catastrophic weather events where large amounts of dust particles are raised and transported by strong winds, characterized by weak horizontal visibility (< 1 km), suddenness, short duration, and severe destruction. Over the past few decades, the observed dust storms in northern China showed generally decreasing trends (Fig. 2), which could have made the dust storms "out of sight" of the public gradually. Yet a most recent strong dust storm event originated from Mongolia since mid-March this year exerted serious impacts on most areas in northern China, and thus waked up again wide concerns on the dust storm occurrences and the causes behind.

Dust storm occurrence is generally a function of natural climatic factors (temperature, precipitation and surface wind speed) and human activity, while it is still unclear which one is the dominating factor controlling the dust storm frequency, magnitude, and extent. The available instrumental records are too short to unravel these questions. Dust storms registered in the natural geological archives can extend the eolian dust records beyond the limited temporal range of meteorological observations, and thus can be used to reconstruct long-term dust storm history.

Geological records extracted from natural archives, like lake sediments and ice core records, also support that dust storms were closely correlated to both climatic factors (Wang et al., 2006; Chen et al., 2013) and human activity (Neff et al., 2008; Chen et al., 2020). However, there is a puzzle whether and when human activities have surpassed natural climatic forcing. One example is a recent study by Chen et al. (2020) in which authors argued that at least 2000 years ago, human activity may have exceeded the natural climatic changes to control dust storm activity in eastern China. Therefore, reliable long-term dust storm records are necessary to deepen these issues.

Recently researchers from Tianjin University and their colleagues reconstructed dust storm history based on well-dated lake sediment grainsize records in northern China, namely Lake Karakul (Zhang et al., 2020) and Lake Daihai (Zhang et al., 2021). They found that the sedimentary sandy fraction (>63 μm) in northern China was a robust indicator of the past dust storms, and the reconstructed dust storms correlate well with those recorded in modern observation, historical literatures, and other robust geological archives (Fig. 3). The reconstructed dust storms generally occurred during cold intervals on annual/decadal scales over the past several centuries (Fig. 3), and such dusty-cold patterns can also be observed in geological archives on even longer timescales, for instance, the dust fluxes in central China loess (Sun and An, 2005), marine sediments (Rea, 1994), and Antarctica ice cores (Lambert et al., 2008) were considerably higher during glacial than interglacial stages. Prof. Hai Xu and colleagues contended that changes in the intensities of the Siberian High and the westerly modulated by temperature variations could be most likely responsible for those observed dust storm patterns.

One striking feature in the reconstructions is the substantially intensified dust storm activities after ~1870 AD, roughly coinciding with the beginning of the Industrial Revolution (Fig. 3). The increased dust particle supply induced by significantly intensified human activities could be responsible for this abrupt increase in dust storm activities. Another interesting feature is that although the dust storms have been systematically activated during the recent warming one more century, an obviously decreasing trend can be seen within this interval (Fig. 3). Authors proposed that the weakening trend was most likely due to the decrease in mean wind speed in response of the recent global warming. "In contrast to the natural solar forced warming, the greenhouse gas-triggered warming may lead to a decrease in global zonal temperature gradient and then a general increase in atmospheric static stability, which is potentially conducive to decreasing global wind speed and dust storm frequency/intensity" said Prof. Xu. Owing to the causal relationship between the recent warming and the decreasing wind speed, Prof. Hai Xu and his colleagues infer that "dust storm activity in northern China is expected to further weaken or remain at its present low level in the near future".

Xu J. 2006. Sand-dust storms in and around the Ordos Plateau of China as influenced by land use change and desertification. CATENA, 65: 279-284. 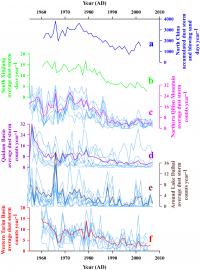 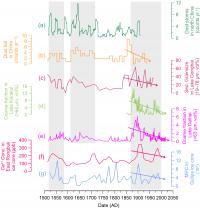