In this inorganic adhesive method that we have developed, we are using indium for the adhesive of which melting point is low at approximately 150 degrees. However, while indium adheres effectively to an extreme low temperature panel made of copper, indium has poor compatibility with carbon. And it was difficult to achieve sufficient adhesion merely by simply affixing carbon to indium. In order to strongly affix carbon to metals, it is necessary that carbon and the metal become familiar, and that metal fills the many carbon holes. For that reason, we decided to construct a membrane composed of a different metal than indium on the carbon extreme low temperature front side of the panel (the adhesion side) using the sputtering method. By this method, atoms and molecules entered into the nano-level holes in the carbon, and the metals entered akin to the roots of a tree, and we were able to construct metal membranes that tightly adhered to the carbon. Further, we investigated the compatibility of various metals, constructed three layers of membranes made of various kinds of metals, and inserted those metals between the carbon and the indium. First, in the first layer to contact carbon, we compose a membrane from titanium which has good compatibility with carbon, and in the third layer we compose a membrane from silver with good compatibility with indium. Then, between the titanium of the first layer and the silver of the third layer is a membrane made from nickel which has good compatibility with titanium and silver. The nickel in the second layer performs the role of a barrier to protect the first layer against penetration by the indium. In this way, between the carbon and the extreme low temperature panel, by using the sputtering method we combine the membranes of the metal with good compatibility, and we establish an adhesion method that gives birth to a strong adhesive force. We succeeded in creating an inorganic adhesion between carbon and metal of extreme low temperature panels, which had been considered until now to be difficult.

Further, from among several types of carbon, we selected the best for hydrogen gas evacuation. Moreover, in order to greatly improve evacuation efficiency, based upon computer simulations, we optimize paths to convey the hydrogen gas to microscopic holes. Undertaking these improvements and the inorganic adhesive, we installed the newly developed cryo-adsorption pump in the LHD vacuum vessel and as a result of our evacuation tests, the pumping speed is now seven times larger compared to the speed heretofore. This new pump, through the control of the flow of hydrogen gas, is anticipated to contribute significantly to research on the long-duration maintenance of high-temperature plasma. We have obtained a patent (Japanese Patent No. 6021276) for "Cryogenic Adsorption Panel and Its Production Method, and the Vacuum System that Uses Those Methods." Because of being able to apply these methods into existing devices, the wide-ranging needs of the industrial world can be met not only in high-temperature plasma experimental devices but also in manufacturing devices of semiconductors and liquid crystal displays which require high vacuum and extremely clean conditions. The articles regarding the development of cryo-adsorption pumps was published in the journal of the The Japan Society of Plasma Science and Nuclear Fusion Research (see page 213 in the journal published in May 2017).

A schematic of the LHD divertor (cross-section) is shown in Figure 1(c). Plasma particles that moved from the high-temperature area and hydrogen gas particles that did not become plasma follow the divertor leg and eventually strike the divertor plate and are evacuated by the pump. When the hydrogen gas flows in the opposite direction toward the plasma, because this causes the cooling of the plasma evacuation is important. 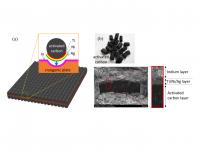 Inorganic Adhesion in the Cryo-Adsorption Pump