Immediately after the liquid explosive bomb plot was uncovered in London in August 2006, the Department of Homeland Security's Science & Technology Directorate (S&T) looked to to find ways to not only detect liquids in baggage and on passengers, but also to figure out what those liquids are. Now, S&T-sponsored scientists at Los Alamos National Laboratory have developed a possible solution. They have successfully tested a liquid explosive detection system that may eventually have many security applications around the country. Machines ready for an operational environment remains a few years away, but the technology is promising to quickly detect liquid explosives within a few years.

Stephen Surko is the Program Manager for the research at S&T. He says, "Los Alamos has done an outstanding job in a relatively short period of time."

When S&T last reported on this technology, it was still in the conceptual phase, and went by a different name (http://www.dhs.gov/xres/programs/gc_1220462488919.shtm). Now known as MagViz, the system adapts the magnetic resonance imaging (MRI) technology, typically used by doctors to scan brains, to screen for harmful liquids, gels, and lotions.

Similar in size and shape to an X-ray machine, a working MagViz prototype was on display at the Albuquerque International Sunport in December. The system is linked to an electronic database that currently contains chemical fingerprints for 50 liquids. As shown in the images here, if a threat liquid is identified, the machine marks the container on the display screen with a red dot. Harmless liquids like water or shampoo are marked with a green dot. If MagViz cannot identify a liquid it marks the container with a yellow dot, requiring further inspection. (See the Los Alamos video for more on the science behind MagViz.)

As development of the system continues, more liquids will be added to the database, and more refinements will help reduce the amount of detection time.

"Our vision for MagViz is that it would be operated in series with more traditional X-ray systems, and a conveyor belt would seamlessly move baggage or other items from one to the next," said Surko, who also noted that individual agencies will make the ultimate determination on the best way to use the technology.

Researchers hope to have the machines detecting dangerous fluids by 2012, and the "3-1-1" rule may eventually become a thing of the past. 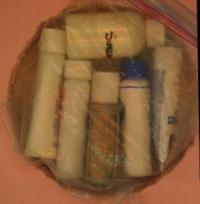 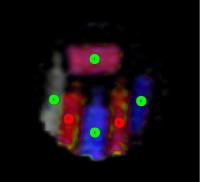