LA JOLLA--(March 15, 2018) Most people have heard of the CRISPR/Cas9 gene-editing technology, which acts as targeted molecular scissors to cut and replace disease-causing genes with healthy ones. But DNA is only part of the story; many genetic diseases are caused by problems with RNA, a working copy of DNA that is translated into proteins.

Now, Salk Institute scientists have created a new tool that targets not DNA, but RNA, and used it to correct a protein imbalance in cells from a dementia patient, restoring them to healthy levels. The new Salk tool, called CasRx, opens up the vast potential of RNA and proteins to genetic engineering, giving researchers a powerful way to develop new gene therapies as well as investigate fundamental biological functions. The work appeared in Cell on March 15, 2018.

"Bioengineers are like nature's detectives, searching for clues in patterns of DNA to help solve the mysteries of genetic diseases," says Patrick Hsu, a Helmsley-Salk Fellow and senior author of the new paper. "CRISPR has revolutionized genome engineering, and we wanted to expand the toolbox from DNA to RNA."

CRISPRs are bacterial immune systems that contain many defense enzymes such as the Cas9 "molecular scissors," which scientists including Hsu have engineered as a powerful DNA-targeting gene-editing tool.

The Salk team decided to search bacterial genomes for new CRISPR enzymes that could target RNA, which could then be engineered to address problems with RNA and resulting proteins.

A given RNA message, for example, can be expressed at varying levels and its balance relative to other RNAs is critical for healthy function. Furthermore, RNA can be spliced in various ways to make different proteins, but problems with splicing can lead to diseases such as spinal muscular atrophy, atypical cystic fibrosis and frontotemporal dementia (FTD). So a drug that targets toxic RNAs or RNAs resulting from improper splicing could have a life-changing impact for people with these types of devastating diseases.

"We began the project with the hypothesis that different CRISPR systems may have been specialized throughout an evolutionary arms race between bacteria and their viruses, potentially giving them the ability to target viral RNA," explains Salk Research Associate Silvana Konermann, an HHMI Hannah Gray Fellow and the paper's first author.

The team developed a computational program to search bacterial DNA databases for the telltale signatures of CRISPR systems: patterns of particular repeating DNA sequences. In doing so, they discovered a family of CRISPR enzymes that targets RNA, and called it Cas13d.

The team realized that, just like the Cas9 family, Cas13d enzymes originating from different bacterial species would vary in their activity, so they ran a screen to identify the best version for use in human cells. That version turned out to be from the gut bacterium Ruminococcus flavefaciens XPD3002, which led them to name their tool CasRx.

"Once we engineered CasRx to work well in human cells, we really wanted to put it through its paces," says Konermann.

That meant engineering CasRx to tackle a disease-related condition: in this case, the neurodegenerative disorder frontotemporal dementia (FTD). In this dementia, the ratio of two versions of the tau protein (also implicated in Alzheimer's disease) is out of balance in neurons. The team genetically engineered CasRx to target RNA sequences for the version of the tau protein that is overabundant. They did this by packaging CasRx into a virus and delivering it to neurons grown from an FTD patient's stem cells. CasRx was 80 percent effective in rebalancing the levels of tau protein to healthy levels.

Compared to other technologies that target RNA, CasRx is unique due to its small size (making it easier to package into therapeutically relevant viral vectors), its high degree of effectiveness, and the fact that it created no discernible off-target effects compared to RNA interference. The Salk team is excited about the possibilities their tool opens up for exploring new biological questions about RNA and protein function, as well as therapies to tackle RNA and protein-based diseases.

"Nature is full of so many secrets," adds Hsu. "It's really a rich, untapped resource for inventing new technologies." 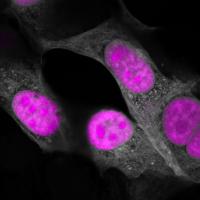