Berkeley -- Over the past decade, in numerous field sites throughout the world, mesh bags of leaf and root litter sat exposed to the elements, day and night, throughout the four seasons, gradually rotting away.

Now, those bags of decomposing organic matter have allowed a research team led by scientists at the University of California, Berkeley, and Colorado State University to produce an elegant and simple set of equations to calculate the nitrogen released into the soil during decomposition, which in turn could significantly improve the accuracy of global climate change models.

The researchers found that the dominant drivers of nitrogen release were the initial concentration of nitrogen and the remaining mass of the leaf and root litter. The equations and how the researchers developed them are described in the Jan. 19 issue of the journal Science.

"In the world of complex biogeochemistry, we've discovered that this fundamental process of nutrient cycling by plants and microbes turns out to be relatively straightforward," said Whendee Silver, professor of ecosystem sciences at UC Berkeley's College of Natural Resources and co-lead author of the study. "Whether it's hot or cold, wet or dry, the equations work. This study highlights the fact that, for microbes, there is a fundamental physiological constraint controlling nitrogen release during decomposition. It took a large-scale, long term study like this to help us see how simple these processes can be."

The project, known as the Long-Term Inter-site Decomposition Experiment, involved 21 field sites. The sites represent seven biomes, from the tundra to tropical forests, encompassing the array of climatic conditions around the world. Many of the sites were part of the Long Term Ecological Research Network sponsored by the National Science Foundation.

Each mesh bag included leaf or root litter, such as pine needles, wheat straw, sugar maple leaves or grass roots. The samples were chosen to represent a wide range of chemical composition.

At each site, dozens of bags were staked to the ground and left to rot. Every year, researchers at the sites would remove a subset of bags so their contents could be dried, weighed and sent to a central lab at Oregon State University for analysis. At the central lab, the contents were weighed a second time and analyzed for their chemical composition.

"The most important component of this study is that we've developed a generic global law that can predict large-scale patterns in litter mass decay rates and nitrogen release from litter," said William Parton, senior research scientist at the Natural Resource Ecology Laboratory at Colorado State University and co-lead author of the study. "There are a lot of global nutrient cycling models out there, but the model we've developed is based on only two parameters, and thus is more scientifically elegant and more widely applicable than the models currently being used."

More than three-fourths of the air we breathe contains nitrogen, an essential element found in all amino acids, the building blocks of protein. In the soil, organic forms of nitrogen are converted by bacteria into the inorganic forms of ammonium and nitrate, primary nutrients plants need for growth. Lack of nitrogen limits plant growth in most regions of the world.

The researchers point out that the cycling of nutrients and carbon in the ecosystem is a key variable in climate change models. "As people try to construct computer models and predict future climate changes, being able to accurately predict carbon and nitrogen cycling will play a key role," said Silver.

While the study improves the ability of scientists to predict the rate of nitrogen release in climate models, the researchers point out that the findings could also improve predictions for the amount of carbon released into the atmosphere from decomposing litter.

"The debate is whether the enhanced litter decay rate from warming will also increase the release of carbon from ecosystems," said Parton. "When you increase litter decomposition rates, you are enhancing carbon dioxide release to the atmosphere. Our study provides algorithms to better predict the rates of these processes under a wide range of conditions."

The researchers found that the rate of decomposition, not nitrogen release, was affected by the two key variables of temperature and moisture. The slowest rates of decomposition were in cold regions, such as boreal forests and tundra, and the fastest in the warm, moist, tropical forests. The only places where litter decomposed completely were the humid tropical sites where, over the course of five years, only 10 percent of the initial litter material remained.

Notably, there was one exception where the model did not apply. "Arid grasslands didn't fit the model because the nitrogen release in those environments is likely to be controlled by exposure to UV radiation," said Silver. "The leaves decomposed faster than they should have based upon the climate alone, and released nitrogen faster than the model predicted based on the initial nitrogen concentrations. The most probable explanation is that systems exposed to high UV radiation circumvent the biological processes in other ecosystems."

Co-authors of the study include researchers from Oregon State University, University of Minnesota, and Northern Arizona University. 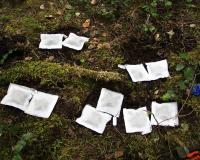