RIVERSIDE, Calif. -- Astrocytes -- star-shaped cells in the brain that are actively involved in brain function -- may play an important role in stuttering, a study led by a University of California, Riverside, expert on stuttering has found.

"Our study suggests that treatment with the medication risperidone leads to increased activity of the striatum in persons who stutter," said Dr. Gerald A. Maguire, professor and chair of the Department of Psychiatry and Neuroscience at the UCR School of Medicine, who led the study. "The mechanism of risperidone's action in stuttering, in part, appears to involve increased metabolism -- or activity -- of astrocytes in the striatum."

Findings from the study, published today in Frontiers in Neuroscience, were borne from a collaboration between Maguire and Shahriar SheikhBahaei, an independent research scholar at the National Institutes of Health's National Institute of Neurological Disorders and Stroke.

The striatum is a key component of the basal ganglia, a group of nuclei best known for facilitating voluntary movement. Present in the forebrain, the striatum contains neuronal activity related to cognition, reward, and coordinated movements.

Stuttering, a childhood onset fluency disorder that leads to speech impairment, is associated with high levels of the neurotransmitter dopamine. Risperidone works by blocking the receptors in the brain that dopamine acts on, thus preventing excessive dopamine activity. Risperidone is available by prescription under a physician's order almost anywhere in the world. In existence for nearly 30 years, it is generally prescribed for schizophrenia and bipolar disorder.

Maguire and SheikhBahaei have now found evidence that astrocytes in the striatum may be crucially involved in how risperidone is able to reduce stuttering.

"We do not know the exact mechanism for how risperidone activates astrocytes in the striatum," said coauthor SheikhBahaei, an expert on astrocytes, and a person who stutters. "What we know is that it activates astrocytes. The astrocytes then release a signaling molecule that affects neurons in the striatum by blocking their dopamine receptors. In our future work, we would like to find this signaling molecule and better understand the exact role astrocytes play in stuttering, which, in turn, could help us design drugs that target astrocytes."

Maguire and his team conducted a randomized, double-blinded placebo-controlled clinical trial with 10 adult subjects to observe risperidone's effects on brain metabolism. At the start of the study and after six weeks of taking risperidone (0.5-2.0 mg/day) or a placebo pill, the 10 participants were assigned to a solo reading aloud task. The participants then each underwent a positron emission tomography, or PET, scan. It turned out that five subjects got risperidone while the other five got a placebo. Those in the risperidone treatment group were found to show higher glucose uptake-- that is, higher metabolism -- in specific regions of the brain according to scans taken after active treatment.

"Naturally, and abnormally, glucose uptake is low in stuttering -- a feature common to many neurodevelopmental conditions," said Maguire, who also is a person who stutters. "But risperidone seems to compensate for the deficit by increasing the metabolism, specifically, in the left striatum. More research is needed to understand this better. Neuroimaging techniques we used to visualize changes in the brains of those who stutter can provide valuable insights into the pathophysiology of the disorder and guide the development of future interventions."

Next, Maguire and SheikhBahaei will aim to further understand what causes stuttering, what the different types of stuttering are, what may be their etiologies; and develop targeted personalized treatments for those who stutter.

"The general goal of our research collaboration is to combine basic research in my lab with Dr. Maguire's clinical studies," SheikhBahaei said. "My lab is generating new animal models to study stuttering which will help us understand what causes different types of stuttering. Researchers have proposed other components are involved in stuttering's etiology. Our data, which suggests astrocytes in the striatum may be playing an important role in the development of stuttering, helps unify some of the findings the scientific literature has seen recently on astrocytes and could help connect the dots."

The UCR School of Medicine has signed a research collaboration agreement with the National Institute of Neurological Disorders and Stroke to work together on research related to stuttering.

"I have been active in the stuttering community for decades," Maguire said. "This is a community that needs support, opportunities, and role models. Dr. SheikhBahaei and I encourage people who stutter to be more engaged in the scientific community. We both stutter and that has not stopped us from achieving our professional and personal goals. Young people who stutter and are thinking about careers in science and medicine should not let this speech disorder hold them back."

For SheikhBahaei, working with Maguire is an ideal collaboration to "bring bench to the bedside."

"We are working to reveal circuits in the brain that control the complex behavior of speaking," he said. "These circuits will shed more light on the mechanism involved in stuttering. Speaking may be the most complex human behavior. Consider that more than 100 muscles in the body must act in synchrony for us to speak."

Maguire and SheikhBahaei were joined in the study by Bo Ram Yoo, a student in the UCR School of Medicine.

The research was supported in part by the philanthropic donation of RG Kirkup and partly by the National Institute of Neurological Disorders and Stroke. The clinical trial of risperidone, which began when Maguire was at UC Irvine, was funded in part by a grant to UC Irvine from Janssen Pharmaceuticals, Inc.

The research paper is titled "Investigation of Risperidone Treatment Associated With Enhanced Brain Activity in Patients Who Stutter."

Star-shaped brain cells may be linked to stuttering

Journal
Frontiers in Neuroscience
Funder
Philanthropic donations to Tufts University and by the Boston Foundation, NIH/National Institutes of Neurological Disorders and Stroke 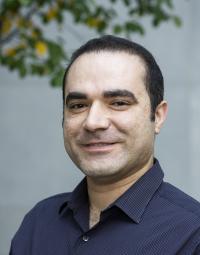