Anyone that's ever interacted with a dog knows that they often have an amazing capacity to interact with people. Now researchers reporting in the journal Current Biology on June 3 have found that this ability is present in dogs from a very young age and doesn't require much, if any, prior experience or training. But, some of them start off better at it than others based on their genetics.

"We show that puppies will reciprocate human social gaze and successfully use information given by a human in a social context from a very young age and prior to extensive experience with humans," said Emily E. Bray of the University of Arizona, Tucson. "For example, even before puppies have left their littermates to live one-on-one with their volunteer raisers, most of them are able to find hidden food by following a human point to the indicated location."

Their studies also found that more than 40% of the variation in a puppy's ability to follow a human's finger pointing is explained by the genes they've inherited. The same goes for variation in gazing behavior during a human-interest task.

"These are quite high numbers, much the same as estimates of the heritability of intelligence in our own species," Bray said. "All these findings suggest that dogs are biologically prepared for communication with humans."

For the last 10 years, Bray and her colleagues have been conducting research with dogs in collaboration with Canine Companions, the largest United States service dog organization serving clients with physical disabilities. Their goal is to better understand how dogs think and solve problems. They also want to learn how these abilities develop and change over time and how dogs' individual experiences and genes contribute to these skills. The findings are of general interest in the fields of animal behavior and evolution. They also have important real-world implications for understanding what makes for a successful service dog.

To understand whether dogs' capacity for communication is explained by their biology, the researchers took advantage of their access to hundreds of budding service dogs at the same early age. They all had an extremely similar rearing history up to that point and a known pedigree going back multiple generations. To explore their abilities, the researchers tested 375 eight-week-old puppies in a standardized way on the exact same tasks. Because they knew how related all the puppies were to each other, they could then use this information to build a statistical model assessing genetic versus environmental factors.

The findings showed that puppies are skillful from the start when it comes to social communications relying on gestures and eye contact. However, such communication only worked when people also initiated the interaction by speaking to the puppies in a high-pitched voice. Without a person initiating, puppies mostly didn't look to people for answers in a task in which food was locked in a Tupperware container.

"From a young age, dogs display human-like social skills, which have a strong genetic component, meaning these abilities have strong potential to undergo selection," Bray said. "Our findings might therefore point to an important piece of the domestication story, in that animals with a propensity for communication with our own species might have been selected for in the wolf populations that gave rise to dogs."

Bray says that the next step is to see if they can identify some of the specific genes that contribute to these behaviors. They're currently collecting cognitive data and blood samples from adult dogs and plan to conduct a genome-wide association study, with the goal of identifying genetic markers associated with these social behaviors. They'll also be following up on the tested dogs' outcomes in the service dog program to see if performance on any of the tested social tasks at eight weeks predicts successful graduation as a service dog. In addition to understanding the genetics, they also hope to explore how different aspects of a dog's early environment might influence their cognitive and social abilities.

This work was supported by Office of Naval Research, the AKC Canine Health Foundation, and the National Science Foundation Graduate Research Fellowship Program.

Puppies are born ready to communicate with people, study shows 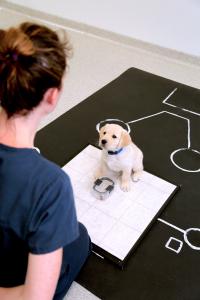