Dogs can tell the difference between happy and angry human faces, according to a new study in the Cell Press journal Current Biology on February 12. The discovery represents the first solid evidence that an animal other than humans can discriminate between emotional expressions in another species, the researchers say.

"We think the dogs in our study could have solved the task only by applying their knowledge of emotional expressions in humans to the unfamiliar pictures we presented to them," says Corsin Müller of the University of Veterinary Medicine Vienna.

The dogs were able to select the angry or happy face more often than would be expected by random chance in every case, the study found. The findings show that not only could the dogs learn to identify facial expressions, but they were also able to transfer what they learned in training to new cues.

"Our study demonstrates that dogs can distinguish angry and happy expressions in humans, they can tell that these two expressions have different meanings, and they can do this not only for people they know well, but even for faces they have never seen before," says Ludwig Huber, senior author and head of the group at the University of Veterinary Medicine Vienna's Messerli Research Institute.

What exactly those different meanings are for the dogs is hard to say, he adds, "but it appears likely to us that the dogs associate a smiling face with a positive meaning and an angry facial expression with a negative meaning." Müller and Huber report that the dogs were slower to learn to associate an angry face with a reward, suggesting that they already had an idea based on prior experience that it's best to stay away from people when they look angry.

The researchers will continue to explore the role of experience in the dogs' abilities to recognize human emotions. They also plan to study how dogs themselves express emotions and how their emotions are influenced by the emotions of their owners or other humans.

"We expect to gain important insights into the extraordinary bond between humans and one of their favorite pets, and into the emotional lives of animals in general," Müller says.

Dogs know that smile on your face 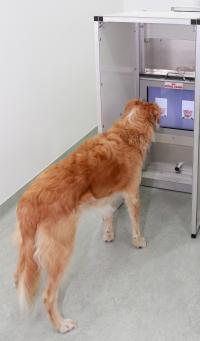