Air pollution is responsible for 550,000 premature deaths a year in Europe - and 7 million worldwide, according to the WHO. Measuring it can be a challenge, however, as the equipment tends to be large and expensive. But soon, this may change, thanks to a small, optical nano-sensor developed at Chalmers University of Technology, Sweden, which can be mounted onto an ordinary streetlight.

The technology is already in use in western Sweden, and researchers and other interested parties hope that the sensor could soon be used in many broad contexts. A collaboration with the University of Sheffield is also underway.

"Air pollution is a global health problem. To be able to contribute to increased knowledge and a better environment feels great. With the help of these small, portable sensors, it can become both simpler and cheaper to measure dangerous emissions extremely accurately," says Chalmers researcher Irem Tanyeli, who has helped develop the small sensors, which measure nitrogen dioxide with great precision.

For the hi-tech sensors to make the move from the lab out into the real world, Irem Tanyeli worked with the Gothenburg-based company Insplorion, co-founded by Chalmers researcher Christoph Langhammer in 2010. With help from financier Mistra Innovation, he has been involved with the company's efforts at taking on the great environmental challenge of precisely mapping air pollution.

"This is a great example of how a university and a company can collaborate. Both parties contribute with their expertise to create a new product, contributing to a more sustainable society," says Christoph Langhammer, Professor at the Chalmers Department of Physics.

Exhaust gases from road traffic are responsible for the majority of nitrogen dioxide pollution in the air. Breathing in nitrogen dioxide is harmful to our health, even at very low levels, and can damage our respiratory systems and lead to cardiac and vascular diseases. According to the World Health Organisation, air pollution is the single biggest environmental health risk worldwide.

The new optical nano-sensor can detect low concentrations of nitrogen dioxide very precisely - down to the parts-per-billion level (ppb). The measuring technique is built upon an optical phenomenon which is called a plasmon. It arises when metal nanoparticles are illuminated and absorb light of certain wavelengths. Christoph Langhammer and his research group have been working in this area for over a decade, and now innovations are starting to see the light of day.

For the last two years, Irem Tanyeli has been working with optimising the sensor material and conducting tests under differently simulated environmental conditions. The technology is now installed in a streetlight in Gothenburg, as part of a collaboration with lighting company Leading Light, to measure the quantity of nitrogen dioxide molecules in the urban environment.

"In the future, we hope that the technology also can be integrated into other urban infrastructure, like traffic lights or speed cameras, or for measuring air quality indoors," says Irem Tanyeli.

A sensor is also installed on the roof of Nordstan in Gothenburg, one of Scandinavia's biggest shopping malls, and soon more will be placed along the route of Västlänken, a major railway tunnel construction project, also in Gothenburg.

The technology has already raised interest from several organisations, including the Urban Flows Observatory, an air quality centre at the University of Sheffield. They will conduct field testing, comparing the nanosensors' results with data from a number of British reference stations.

"There is a lack of small functional nitrogen dioxide sensors on the market. We find this nano plasmonic solution interesting, and look forward to the test results," says Professor Martin Mayfield at Urban Flows Observatory, University of Sheffield.

Other interested parties include Stenhøj Sverige, a company, which develops gas and smoke analysers for automotive repair shops and vehicle inspection companies, as well as IVL, Swedish Environmental Research Institute. IVL works with applied research and development in close collaboration with industry and the public sphere to address environmental issues.

The new sensor technology is not limited to measuring nitrogen dioxide but can also be adapted to other types of gases. There is therefore potential for further innovation.

"Nitrogen dioxide is just one of the many substances which can be detected with the help of optical nanosensors. There are great opportunities for this type of technology," says Christoph Langhammer.

Soon, air pollution could be measured on every street corner 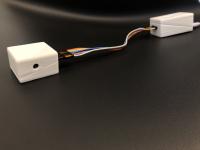