A novel class of antimalarial compounds that can effectively kill malaria parasites has been developed by Australian and US researchers.

In preclinical testing, the compounds were effective against different species of malaria parasites, including the deadly Plasmodium falciparum, and at multiple stages of the parasite lifecycle. The compounds target a previously unexplored parasite pathway and could overcome existing issues of parasite drug resistance, an ongoing and increasingly urgent problem.

The researchers hope that drugs based on these early compounds will soon enter phase 1 clinical trials.

The research, a collaboration between the Walter and Eliza Hall Institute and global pharmaceutical company MSD, was published in Cell Host & Microbe.

"This is an exciting new class of antimalarial compounds that could fill a critical and widening gap in our efforts to control and eliminate malaria," Professor Cowman said.

"In preclinical testing, the lead compound WM382 inhibited growth of the malaria parasite in the host and prevented transmission back to the mosquito. These results indicate that this class of compounds is very promising as a potent new treatment for malaria. We hope that drugs based on these compounds will soon progress to human phase I clinical trials."

"This novel class of compounds has the potential to not only cure people with malaria, but also prevent transfer of the parasite to the mosquito and, consequently, halt further transmission of the disease. This is an exciting prospect, as current antimalarial drugs kill the malaria parasite in the blood but do not fully prevent transmission," Professor Cowman said.

A major problem with current antimalarial drugs is that malaria parasites evolve and develop resistance to the drugs over time.

"Much like antibiotic resistance, malaria resistance is an emerging crisis," Professor Cowman said.

"Effective antimalarial drugs are not just critical for the infected individual, they are also critical for breaking the cycle of infection and an important way for us to reach our goal of eliminating malaria from highly endemic regions."

Once parasite resistance emerges, it can quickly spread through a region, or even globally. "In some areas, parasites are resistant to all three frontline malaria treatments. So novel drugs are urgently needed," he said.

In recent years, the focus of international efforts to develop new malaria drugs have centred on two criteria; they must target a novel process or pathway to avoid pre-existing resistance to current drugs; and they must be active at multiple stages of the parasite lifecycle.

Professor Cowman said WM382 successfully met both of these criteria.

The malaria parasite has a complex lifecycle. Humans are infected by the bite of an infected mosquito. The parasites migrate to the liver to grow and divide undetected. It is then released into the blood, where it can be transmitted back to a mosquito and passed on to their next victim.

Professor Cowman said WM382 targeted two crucial enzymes in the malaria parasite, blocking their function and killing the parasite. "This compound has a two-pronged approach to disable the parasite, which helps explain its potency and effectiveness," Professor Cowman said. "It targets plasmepsin IX (PMIX) and plasmepsin X (PMX), two 'master regulators' that are critical for parasite survival. PMIX and PMX are involved in multiple stages of the parasite lifecycle and, because the compound hits both these targets, it is harder for parasites to develop resistance."

The research was a multidisciplinary, international collaboration between researchers with expertise in malaria biology, medicinal chemistry and drug development. Research at the Walter and Eliza Hall Institute was led by Professor Cowman, with Dr Paola Favuzza, Associate Professor Justin Boddey, Dr Brad Sleebs and colleagues. The MSD team was headed by Dr Olsen, with Dr Manuel de la Ruiz and colleagues. The research was funded by the Wellcome Trust (UK), Australian National Health and Medical Research Council and the Victorian Government. 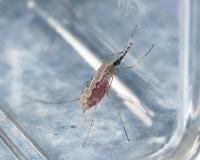