With 3,000 known species and thousands more left to describe, the wasps of the subfamily Microgastrinae are the single most important group of parasitoids attacking the larvae of butterflies and moths, many of which are economically important pests. Consequently, these wasps have a significant impact on both the world's economy and biodiversity.

Due to their affinities, these wasps are widely used in biological control programs to manage agricultural and forestry pests around the globe. Further, they have also been prominently featured in many basic and applied scientific research (e.g. chemical ecology, biodiversity studies, conservation biology, genomics, behavioural ecology). However, the information about Microgastrinae species is scattered across hundreds of papers, some of which are difficult to find. To make matters worse, there has never been an authoritative checklist of the group at a planetary scale.

All currently available information about the group is now brought together in a large monograph of 1,089 pages, published in the open-access, peer-reviewed journal ZooKeys. The publication presents a total of 2,999 valid extant species belonging to 82 genera. On top of that, the monograph features fossil species and genera, unavailable names and the institutions that store the primary types of all listed species.

Moreover, the researchers have included extensive colour illustrations of all genera and many species (thousands of images in 250 image plates); brief characterisation and diagnosis of all genera; detailed species distributions (within biogeographical regions and per individual country); synopsis of what is known on host-parasitoid associations; summary of available DNA barcodes; estimations of the group diversity at world and regional levels; as well as notes on individual species upon request.

"Compiling this annotated checklist was, more than anything, a labour of love," says Dr. Jose Fernandez-Triana of the Canadian National Collection of Insects, lead author of the paper.

"For the past six or seven years, we have spent thousands of hours pouring through hundreds of publications, reading original descriptions in old manuscripts, checking type specimens in many collections worldwide, exchanging information with colleagues from all continents. For the past year or so, I basically stopped all other ongoing research projects I was involved with, to focus solely (almost obsessively!) on finishing this manuscript. The work was often tedious and mind-numbing, and many times I had the temptation to delay the completion of the paper for a later time. However, I was lucky that the other co-authors were just as passionate as myself, and we all pushed each other to finish the task when energy ran low," comments Dr. Fernandez-Triana.

"For the past few years, the Microgastrinae wasps have been one of the most intensively studied groups of insects, at least from a taxonomic perspective," he adds. "Just to give you an idea: between 2014 and 2019 a total of 720 new species of Microgastrinae were described worldwide. That is an average of one new species every three days, sustained over a six-year period and showing no signs of slowing down."

He also points out that many scientists from many different countries and biogeographical regions have been involved in the description of the new species. The paper recognises them all and their contributions in the Acknowledgements section.

"You could even say that we are witnessing a renaissance in the study of this group of wasps. However, even then, what has been done is only the tip of the iceberg, as we estimated that only 5 to 10% of all Microgastrinae species have been described. That means that we do not have a name, let alone detailed knowledge, for 90-95% of the remaining species out there. Perhaps, there could be up to 50,000 Microgastrinae wasp species worldwide. It is truly humbling when you consider the magnitude of the work that lies ahead."

Yet, it is not only a matter of counting huge numbers of species. More importantly, many of those species either have already been put in use as biocontrol agents against a wide range of agricultural and forestry pests, or have the potential to be in the future.

For applied scientists, working with hyperdiverse and poorly known groups such as Microgastrinae is even more perplexing. Navigating the maze of old names, synonyms (species described more than one time under different names), homonyms (same names applied to different species), or unavailable names (names that do not conform to the rules of the International Commission of Zoological Nomenclature) is a daunting task. Often, that results in the same species being referred to in several different ways by different authors and academic works. Consequently, many historical references are full of misleading or even plainly wrong information. Meanwhile, it is very difficult to seek out the useful and correct information.

The present annotated checklist could work as a basic reference for anyone working with or interested in the parasitoid wasps of the subfamily Microgastrinae. In the future, the authors hope to produce revised editions, thus continuing to incorporate new information as it is generated, and to also correct possible mistakes.

"We welcome all kinds of criticisms and suggestions," concludes Dr. Fernandez-Triana. "And we hope that biocontrol practitioners will also help us, the taxonomists, to improve future versions of this work. However, for the time being, let me say that it is a tremendous relief to get this first version out!"

All microgastrinae wasps from around the world finally together in a 1,089-page monograph 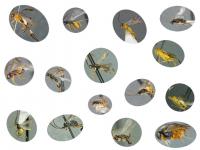