A small fly the size of a grain of rice could be the Top Gun of the fly world, with a remarkable ability to detect and intercept its prey mid-air, changing direction mid-flight if necessary before sweeping round for the kill.

The robber fly Holcocephala is a relatively small fly - at 6mm in length, it is similar in size of the average mosquito. Yet it has the ability to spot and catch prey more than half a metre away in less than half a second - by comparison to its size, this would be the equivalent of a human spotting its prey at the other end of a football pitch. Even if the prey changes direction, the predator is able to adapt mid-air and still catch its prey.

An international team led by researchers from the University of Cambridge was able to capture this activity by tricking the fly into launching itself at a fake prey - in fact, just a small bead on a fishing line. This enabled the team to witness the fly's remarkable aerial attack strategy. Their findings are published today in the journal Current Biology.

The robber fly has incredibly sophisticated eyes: like all flies, it has compound eyes made up of many lenses - in the case of the robber fly, it is thought to have several thousand lenses per eye. However, unlike many species of fly, it has a range of lens sizes, from just over 20 microns to around 78 microns - the width of a human hair. The larger lenses are the same size as those of a dragonfly, which is believed to have the best vision of all insects but is 10 times larger, and help reduce diffraction which would otherwise distort the image

"There's a trade-off going on between having excellent vision - which requires bigger lenses - and the size of the insect," explains Dr Paloma Gonzalez-Bellido from Cambridge's Department of Physiology, Development and Neuroscience. "The only way a robber fly could have vision as excellent as the 'poster child' of predatory insects, the dragonfly, across its entire visual field would be to have an eye with many more and larger lenses - but then the fly itself would need to be much larger to be able to carry it."

To get around this problem, the robber fly has a concentration of larger lenses in the centre of its vision, accounting for only around one thousandth of its visual space. The lenses get smaller in size around the outside of the eye. Importantly, the team of researchers also showed that below the very large central lenses, this robber fly has evolved extremely small light detectors, which are placed almost parallel to each other and much further away from the lens than normal. This arrangement preserves the high local image resolution, which is very close to that of much larger dragonflies.

When it sees a potential prey, the fly launches itself upwards while maintaining a 'constant bearing angle' - in other words, it moves in a direction such that while moving closer and closer to its prey, it still maintains the same relative bearing. This ensures that it will intercept its prey.

"If you think of this as though you're driving along the motorway and a car is coming down the slip road, then if the relative angle between you and this car remains constant, you will collide," explains PhD student Sam Fabian. "Of course, you'd take evasive action, but in the case of the robber fly, this is what it wants."

This strategy of maintaining the constant relative bearing also allows the robber fly to manoeuvre itself mid-air in the event that its prey changes direction. The researchers demonstrated this by switching the direction of their fake prey while the robber fly was mid-flight and observing how the fly responded.

Once the fly is around 29 cm away from its prey - though exactly how it judges this distance is still unclear - the fly displays a remarkable strategy never before observed in a flying animal. It 'locks-on' to its prey while changing its own trajectory, enabling it to sweep round, slow down and come alongside the prey to make its final attack.

"What you see is similar to a baton pass in a relay race: when the two runners are heading in a similar direction and speed, they are more likely to be successful than if they are passing each other at ninety degrees," says Dr Trevor Wardill.

The researchers believe the robber fly's sensory system, which maximises precision in its vision while minimising the amount of information needing processing, is the key to its ability to capture prey as accurately is it does while retaining such a small body size. This technology could be harnessed by manmade flying robots, or drones, they say.

"The problem with drones is often one of the battery power necessary for accurate image processing," says Dr Gonzalez-Bellido. "The processing power is a huge drain on resources. But as is often the case, we can take lessons from the natural world to minimise the power requirements. This, combined with the robber fly's remarkable hunting ability, could help in the design of drones designed to take down illegal drones near airports, for example."

The research was largely funded by the US Air Force Office of Scientific Research and the Biotechnology and Biological Sciences Research Council.

See the world through the eyes of a robber fly in the Plant and Life Sciences Marquee at the Cambridge Science Festival, Saturday 18 March 2017.

Detect. Lock on. Intercept. The remarkable hunting ability of the robber fly 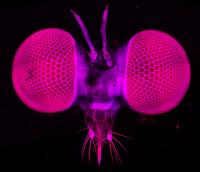