Octopuses have generally been viewed as solitary creatures--and their color-changing abilities primarily as a means to hide from hungry predators. But, after binge watching more than 52 hours of octopus TV, researchers reporting in the Cell Press journal Current Biology on January 28 have found that octopuses actually do have a social life. And it's not without drama.

"We found that octopuses are using body patterns and postures to signal to each other during disputes," says David Scheel of Alaska Pacific University. "The postures and patterns can be quite flashy, such as standing very tall, raising the body mantle high above the eyes, and turning very dark."

The octopuses in question belonged to a species known as Octopus tetricus living in the shallows of Jervis Bay, Australia. Scheel and his colleagues were tipped off that something interesting might be going on in that bay by a diver who alerted an online community of people interested in cephalopods that he'd seen something interesting. The researchers followed up from there, ultimately witnessing 186 octopus interactions and more than 500 actions. In all that video, the octopuses spent more than 7 hours interacting.

Octopuses also displayed on high ground, standing with their web spread and their mantle elevated. Octopuses in that "stand tall" posture frequently also sought higher ground. The researchers suspect the octopuses' behaviors are meant to make themselves appear larger and more conspicuous.

The findings expand scientists' understanding of how octopuses interact and communicate with each other. The researchers now suspect that social interactions among octopuses are likely to occur wherever food is plentiful and hiding places are scarce. They'll continue to study these octopuses and to explore how their social lives might influence the size of the population.

Financial support for this study was provided by the City University of New York, Alaska Pacific University, and from donations by the Pollock Conservation Consortium. 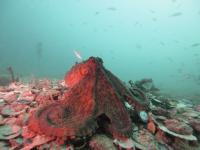 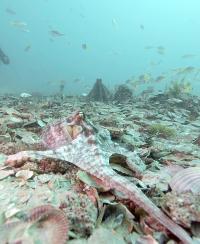