In the past years, invisibility cloaks were developed for various senses. Objects can be hidden from light, heat or sound. However, hiding of an object from being touched still remained to be accomplished. KIT scientists have now succeeded in creating a volume in which an object can be hidden from touching similar to a pea under the mattress of a princess. The results are now presented in the renowned Nature Communications journal.

The invisibility cloak is based on a so-called metamaterial that consists of a polymer. Its major properties are determined by the special structure. "We build the structure around the object to be hidden. In this structure, strength depends on the location in a defined way," explains Tiemo Bückmann, KIT, the first author of the article. "The precision of the components combined with the size of the complete arrangement was one of the big obstacles to the development of the mechanical invisibility cloak." The metamaterial is a crystalline material structured with sub-micrometer accuracy. It consists of needle-shaped cones, whose tips meet. The size of the contact points is calculated precisely to reach the mechanical properties desired. In this way, a structure results, through which a finger or a measurement instrument cannot feel its way.

In the invisibility cloak produced, a hard cylinder is inserted into the bottom layer. Any objects to be hidden can be put into its cavity. If a light foam or many layers of cotton would be placed above the hard cylinder, the cylinder would be more difficult to touch, but could still be felt as a form. The metamaterial structure directs the forces of the touching finger such that the cylinder is hidden completely. "It is like in Hans-Christian Andersen's fairy tale about the princess and the pea. The princess feels the pea in spite of the mattresses. When using our new material, however, one mattress would be sufficient for the princess to sleep well," Bückmann explains.

Implementation of such a mechanical invisibility cloak is rather complex. After the definition of the desired mechanical properties, the physical basic equations are inverted mathematically in order to draw conclusions with respect to the structure of the metamaterial. Using this method, materials not encountered in nature can be planned. Examples are solids which are stiff to pressure, but soft to shear. For manufacture from the polymer, the direct laser writing method of the KIT spinoff Nanoscribe is applied. It reaches the required precision over the complete sample length of several millimeters.

The mechanical invisibility cloak represents pure physical fundamental research, but might open up the door to interesting applications in a few years from now, as it allows for producing materials with freely selectable mechanical properties. Examples are very thin, light, and still comfortable camping mattresses or carpets hiding cables and pipelines below.

Karlsruhe Institute of Technology (KIT) is a public corporation according to the legislation of the state of Baden-Württemberg. It fulfills the mission of a university and the mission of a national research center of the Helmholtz Association. Research activities focus on energy, the natural and built environment as well as on society and technology and cover the whole range extending from fundamental aspects to application. With about 9400 employees, including more than 6000 staff members in the science and education sector, and 24500 students, KIT is one of the biggest research and education institutions in Europe. Work of KIT is based on the knowledge triangle of research, teaching, and innovation.

The photos of printing quality may be downloaded under http://www.kit.edu or requested by mail to presse@kit.edu or phone +49 721 608-4 7414. The photos may be used in the context given above exclusively.

KIT researchers protect the princess from the pea 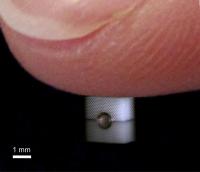 With the Finger or a Force Measurement Instrument, no Information is Obtained About the Bottom Side 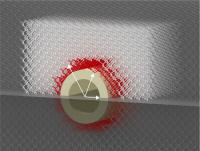 The Material Consists of Precisely Calculated Needle-shaped Elements, Such that Strength Depends on