July 30, 2009—Kumano Basin off Kii Peninsula, approximately 58 km southeast of Japan— Despite harsh atmospheric and ocean conditions, and complex geological characteristics of its drill site, the deep-sea drilling vessel CHIKYU, for the first time in the history of scientific ocean drilling, conducted riser-drilling operations to successfully drill down to a depth of 1,603.7 meters beneath the sea floor (at water depth of 2,054 meters). Engaged in IODP Expedition 319, the CHIKYU is drilling deep into the upper portion of the great Nankai Trough earthquake zone to gain insights into geological formations and stress-strain characteristics. The CHIKYU is operated by the Japan Agency for Marine-Earth Science and Technology (JAMSTEC) a partner in the Integrated Ocean Drilling Program (IODP). The Kumano Basin drilling and sampling operations began on May 12; the science party is expected to complete the first drill site on or about August 1.

Riser-drilling technology was employed from about 700 meters below the sea floor to the bottom of the hole. Riser-drilling involves the circulation of drilling fluid that helps maintain pressure balance within the borehole. Cuttings were recovered from the circulated drilling fluid and analyzed to gain a better overall picture of downhole changes in lithology and age. Core samples also were collected between depths of 1,510 and 1,593.3 meters below the seafloor.

Co-Chief Scientist Lisa McNeill of University of Southampton, UK, states, "This state-of-the-art technology enables scientists to access an unknown area. It will provide a lot of important information about what has happened in the seismogenic zone in the past and its present condition." She adds, "I'm very pleased to be a member of the science party conducting the first riser-drilling operation in the Nankai Trough."

Co-Chief Scientist Timothy Byrne of University of Connecticut emphasizes the importance of the Nankai Trough experiment results. "These two parameters , stress magnitude and pore pressure," he says, "are both important to understanding earthquake processes."

In addition, vertical seismic profiling was conducted from July 24󈞅 to obtain accurate details of the geological structure of the plate boundary system. The activity involved an array of 16 seismographs vertically lowered into the borehole and eight ocean-bottom seismographs placed on the sea floor. An air-gun array on the JAMSTEC research vessel KAIREI generated elastic waves, which traveled through the formation to be recorded on the borehole and sea floor instruments.

"The seismic sensor array was installed in this hole below the thick sediment layer," says Co-Chief Scientist Eiichiro Araki of JAMSTEC. "It acts like a telescope exploring the structure of faults in detail, which are responsible for causing large earthquakes such as the one that occurred here in 1944."

Operations at this drill site are expected to conclude after casing the borehole to the bottom of the hole and capping it with a corrosion cap for future installation of a long-term borehole monitoring system (LTBMS). After completion of this task, the CHIKYU will move to its next drill site, where riserless drilling will be employed to penetrate the shallow portion of the megasplay fault branching from the seismogenic zone. Logging-while-drilling (LWD) will be conducted to measure rock properties, geological formation, and geophysical characteristics of the area. As a preliminary operation for LTBMS scheduled in the future, observatory instruments will be installed inside the hole to measure borehole temperature and pressure over the next few years.

Further analyses are expected to generate significant scientific knowledge of past earthquake activities and development processes of the Nankai Trough accretionary prism, as well as the mechanism of occurrence of large earthquakes and tsunamis.

Co-Chief Scientist Demian Saffer of The Pennsylvania State University notes, "With the efforts of the drillers and operations groups, we succeeded in conducting several very challenging experiments, many of which can only be achieved by riser drilling. The results provide important information about conditions within the rocks above zones where earthquakes occur. Ultimately, we plan to install long-term observatory systems in these boreholes that will allow us to continuously monitor the geologic formation during the earthquake cycle."

Daily reports, photos and video from the CHIKYU are available online at: http://www.jamstec.go.jp/chikyu/eng/Expedition/NantroSEIZE/special.html

The above schedule is subject to change depending on the progress of drilling operation and weather.

Riser drilling involves a large marine riser pipe that connects the CHIKYU and the seafloor. The riser pipe guides the drill pipe as it reenters the well. Drilling fluid is pumped up and down between the riser pipe and the drill pipe. Fluid circulation and use of the blow-out preventer (BOP) help maintain pressure balance within the borehole and prevent it from collapsing, enabling safer and deeper drilling. 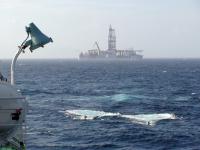