They can estimate whether native plants in the neighbourhood of invasive species incorporate the nitrogen fixed by the latter. The biologists examined the Sydney Golden Wattle (Acacia longifolia), an Australian shrub that has established itself in Mediterranean climates worldwide. They found that the invasive species threatens native ecosystems not only through its prolific growth but also by fertilizing the surrounding soil with nitrogen – this effect markedly extended beyond the area occupied by the invader. This innovative method (called 15N isoscapes) is being published today (13 March) in the renowned journal Ecology Letters.

Most plants can only take up nitrogen from the soil. The Sydney Golden Wattle (Acacia longifolia) in contrast, is able to assimilate nitrogen from the air with the help of nitrogenfixing bacteria. As a result, this acacia has a large advantage over native non nitrogen fixing species on nitrogen-poor soils such as the dunes on the Portuguese coast at Tróia which the research team from Bielefeld University are investigating. On some of these dunes, a massive encroachments of the non-native acacia has already taken place. It suppresses other plants by using more than its share of the limited nutrients and rainwater. Its leaves and branches also shade out smaller plants in the understory. The ecologists Professor Dr. Christiane Werner and her team - Katherine G. Rascher, Christine Hellmann, and Cristina Máguas - wanted to know whether the invasive impact of this acacia is even broader.

Through the decomposing leaves of these acacias, large amounts of fixed nitrogen originating from the air are passed into the soil. One central question for the researchers was whether the native plants in the neighbourhood of the invader use this nitrogen. The additional nutrients would then potentially enhance the growth rates of neighbouring native species. Although this seems positive at first glance, it has problematic consequences for the species diversity in the dune system, because 'dunes are sensitive ecosystems that depend on slow growth and a sustainable use of resources', Christiane Werner says. If the plants grow more quickly than usual, then they use more water, soils becomes drier, endangering the sensitive equilibrium between the native plant community.

The research team has now confirmed that the Portuguese crowberry (Corema album), a native shrub on the Portuguese coast, uses a significant amount of the nitrogen that the Sydney Golden Wattle fixes from the air. 'The effect of the non-native acacia on these shrubs is considerable', says Christiane Werner. Her team took leaf samples in a section of the dunes while mapping the locations of the plants. Using an isotope ratio mass spectrometer to analyse the proportion of 15N in the samples, they compared the results with the plant distribution maps. 'This showed that the acacias influence the nitrogen level and the growth of native plants for a radius of up to eight metres outside their canopy', says Christiane Werner. 'Although the acacia is present in only one-fifth of the area under study, it changes the nitrogen dynamics in almost two-thirds of this area'.

For the biologists, this is a significant finding, because it helps to understand how invasive species such as the Sydney Golden Wattle from Australia manage to proliferate in new ecosystems and suppress native species: in this case, fertilizing their surroundings contributes greatly to the success of this acacia.

The method the ecologists are applying is called 'isoscaping'. It is normally used to pinpoint the landscape in which material originates by determining the isotope ratios, e.g. of mineral or plant residues. The research team in Bielefeld is the first to downscale the procedure to the level of a plant community. Christiane Werner reports that the new method is not only suitable for measuring the impact of non-native plants. In future, it could also be used to study, for example, the effect of factory effluents or agricultural fertilizers on ecosystems. 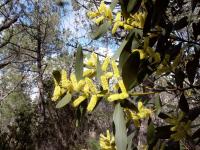