CHAMPAIGN, Ill. — A new study in fruit flies offers a broad view of the potent and sometimes devastating molecular events that occur throughout the body as a result of methamphetamine exposure.

The study, described in the journal PLoS ONE, tracks changes in the expression of genes and proteins in fruit flies (Drosophila melanogaster) exposed to meth.

Unlike most studies of meth, which focus on the brain, the new analysis looked at molecular changes throughout the body, said University of Illinois entomology professor Barry Pittendrigh, who led the research.

"One of the great things about working with fruit flies is that because they're small, we can work with the whole organism and then look at the great diversity of tissues that are being impacted," Pittendrigh said. "This is important because we know that methamphetamine influences cellular processes associated with aging, it affects spermatogenesis, and it impacts the heart. One could almost call meth a perfect storm toxin because it does so much damage to so many different tissues in the body."

By tracking changes in gene expression and protein production of fruit flies exposed to meth, the researchers identified several molecular pathways significantly altered by the drug.

Many of these cascades of chemical reactions within cells are common to many organisms, including humans, and are similar even among very different families of organisms.

Illinois crop sciences professor Manfredo Seufferheld, a co-author on the study, saw changes that indicate that meth exposure may alter the cell's energy metabolism in a manner that mirrors changes that occur in rapidly growing cancer cells. Most types of cancer rely primarily on the rapid breakdown of glucose in a process called glycolysis, which does not require oxygen even when oxygen is available. In contrast, healthy cells tend to use oxidative respiration, a slower and more efficient energy-generating process that occurs in the presence of oxygen. This aberration in energy metabolism observed in cancer cells is called the Warburg effect.

"The discovery of the molecular underpinnings of the meth syndrome in Drosophila – based on a systems biology approach validated by mutant analysis – has the potential to be used in advancing our knowledge about malignant cell proliferation by understanding the connections behind the Warburg effect and cell death," Seufferheld said.

Since glycolysis uses glucose to produce energy, the researchers tested the hypothesis that sugar metabolism is involved in the "toxic syndrome" spurred by meth. They found that meth-exposed fruit flies lived longer if they consumed trehalose, a major blood sugar in insects that also is an antioxidant.

Human meth users are known to crave sugary drinks, said lead author Lijie Sun. "And now we have evidence that increased sugar intake has a direct impact on reducing the toxicity of meth, at least in flies."

The researchers found that meth caused changes that may interfere with the critical balance of calcium and iron in cells, and they were the first to identify numerous genes that appear to be involved in the meth-induced dysfunction of sperm formation.

"All in all, this study shows that Drosophila melanogaster is an excellent model organism in which to study the toxic effect of methamphetamine at the molecular level," said Illinois postdoctoral researcher Kent Walters, an author on the study.

The study, "Systems-scale Analysis Reveals Pathways Involved in Cellular Response to Methamphetamine," is available online or from the U. of I. News Bureau. 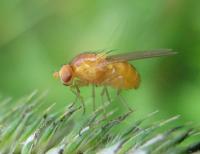