AUSTIN, Texas -- DNA molecules that follow specific instructions could offer more precise molecular control of synthetic chemical systems, a discovery that opens the door for engineers to create molecular machines with new and complex behaviors. Researchers have created chemical amplifiers and a chemical oscillator using a systematic method that has the potential to embed sophisticated circuit computation within molecular systems designed for applications in health care, advanced materials and nanotechnology.

The findings are published in the Dec. 15 issue of the journal Science.

Chemical oscillators have long been studied by engineers and scientists. The researchers who discovered the chemical oscillator that controls the human circadian rhythm --responsible for our bodies' day and night rhythm -- earned the 2017 Nobel Prize in physiology or medicine.

Though understanding of chemical oscillators and other biological chemical processes has evolved significantly, scientists do not know enough to control the chemical activities of living cells. This is leading engineers and scientists to turn to synthetic oscillators that work in test tubes rather than in cells.

In the new study, David Soloveichik and his research team in the Cockrell School of Engineering at The University of Texas at Austin show how to program synthetic oscillators and other systems by building DNA molecules that follow specific instructions.

Soloveichik, an assistant professor in the Cockrell School's Department of Electrical and Computer Engineering, along with Niranjan Srinivas, a graduate student at the California Institute of Technology, and the study's co-authors, have successfully constructed a first-of-its-kind chemical oscillator that uses DNA components -- and no proteins, enzymes or other cellular components -- demonstrating that DNA alone is capable of complex behavior.

According to the researchers, their discovery suggests that DNA can be much more than simply a passive molecule used solely to carry genetic information. "DNA can be used in a much more active manner," Soloveichik said. "We can actually make it dance -- with a rhythm, if you will. This suggests that nucleic acids (DNA and RNA) might be doing more than we thought, which can even inform our understanding of the origin of life, since it is commonly thought that early life was based entirely on RNA."

The team's new synthetic oscillator could one day be used in synthetic biology or in completely artificial cells, ensuring that certain processes happen in order. But oscillation is just one example of sophisticated molecular behavior. Looking beyond oscillators, this work opens the door for engineers to create more sophisticated molecular machines out of DNA. Depending on how the molecular machines are programmed, different behaviors could be generated, such as communication and signal processing, problem-solving and decision-making, control of motion, etc. -- the kind of circuit computation generally attributed only to electronic circuits.

"As engineers, we are very good at building sophisticated electronics, but biology uses complex chemical reactions inside cells to do many of the same kinds of things, like making decisions," Soloveichik said. "Eventually, we want to be able to interact with the chemical circuits of a cell, or fix malfunctioning circuits or even reprogram them for greater control. But in the near term, our DNA circuits could be used to program the behavior of cell-free chemical systems that synthesize complex molecules, diagnose complex chemical signatures and respond to their environments."

The team developed their new oscillator by building DNA molecules that have a specific programming language, producing a repeatable workflow that can generate other complex temporal patterns and respond to input chemical signals. They compiled their language down to precise interactions -- a standard practice in the field of electronics but completely novel in biochemistry.

The team's research was conducted as part of the National Science Foundation's (NSF) Molecular Programming Project, which launched in 2008 as a faculty collaboration to develop molecular programming into a sophisticated, user-friendly and widely used technology for creating nanoscale devices and systems.

Funding for the UT Austin team's work was provided by the NSF, the Office of Naval Research, the National Institutes of Health and the Gordon and Betty Moore Foundation. 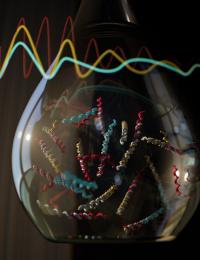