NEW YORK (June 5, 2018)--The lowly sea cucumber strikes observers as a simple sausage-like creature, one that is far less interesting than brightly colored reef fish or color-changing octopi that share its coastal habitat.

The sea cucumber's unimpressive appearance belies the outsized role these creatures play in converting decomposing organic matter into recyclable nutrients and keeping coastal ecosystems healthy and clean, and overfishing them can have negative impacts on coastal marine environments, according to a new study focusing on a species of sea cucumber called a sandfish in the journal PeerJ.

In a sense, sea cucumbers are the vacuum cleaners of coastal marine environments. Since these invertebrates are also the target of a growing demand from Asian markets--dried sea cucumbers are known as "bêche-de-mer"--the authors of the study sought to examine the ecological implications of removing them from tropical coastal areas.

"Our study was designed to determine exactly how the removal of these organisms is impacting coastal ecosystems, which in this case was a coral reef flat in Fiji," said lead author Steven Lee.

The experiment focused on a specific species of sea cucumber known as the sandfish (Holothuria scabra), and was conducted along a wide reef flat along the coast of Vanua Levu, Fiji for several months between September 2015 and February 2016. After conducting a standard survey of the site in order to determine the density of sandfish on the sea bottom, the researchers created 16 square plots with four "treatments" containing different densities of sea cucumbers, all of which were designed to ascertain the implications of harvesting, and overharvesting, sea cucumbers from the reef.

The research team found that, in plots with high densities of sea cucumbers, oxygen conditions within the sediment stayed relatively stable, even under elevated sea surface temperatures experienced during the 2015/2016 El Niño event. In plots where all sea cucumbers had been removed, the penetration of oxygen into surface sediments decreased substantially, by 63 percent.

Overall, the researchers found that a reef's ability to handle increases in organic matter inputs from rainfall and flooding inland was diminished by the removal of sea cucumbers.

"Our findings suggest that overharvesting of sandfish and other sea cucumber species could have lasting effects on the marine ecosystems of small Pacific islands such as those in Fiji, resulting in changes that could limit the productivity of shallow water ecosystems," said Dr. Sangeeta Mangubhai, Director of WCS's Fiji Program. "Hopefully these results will help inform management decisions that will conserve moderate to high densities of sea cucumbers and protect these ecosystems in the interest of safeguarding coastal livelihoods and food security."

"Sea cucumbers are an important source of livelihood for many tropical coastal communities and are heavily fished throughout the tropical belt, but so far we didn't have a good understanding of the wider ecological implications of harvesting them" said Dr. Sebastian Ferse of the Leibniz Centre for Tropical Marine Research (ZMT) in Bremen, who collaborated with WCS in conducting this study as part of a project that looks into the social and ecological resilience of coral reefs in the South Pacific. "The results of this study fill an important knowledge gap and are timely for the management of an important resource for coastal communities."

This work was supported by: the Leibniz Centre for Tropical Marine Research (ZMT); WCS; University of Bremen; the University of the South Pacific; and the residents of Natuvu village who permitted the study within their traditional fishing ground.

2018 has been designated by the International Coral Reef Initiative as the third International Year of the Reef. This is a great opportunity to come together to strengthen awareness on the plight of coral reefs, to step up and initiate conservation efforts. 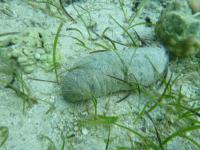