Humans have changed the world's oceans in ways that have been devastating to many marine species. But, according to new evidence, it appears that the change has so far been good for cephalopods, the group including octopuses, cuttlefish, and squid. The study reported in the Cell Press journal Current Biology on May 23 shows that cephalopods' numbers have increased significantly over the last six decades.

"The consistency was the biggest surprise," says Zoë Doubleday of Australia's Environment Institute at the University of Adelaide. "Cephalopods are notoriously variable, and population abundance can fluctuate wildly, both within and among species. The fact that we observed consistent, long-term increases in three diverse groups of cephalopods, which inhabit everything from rock pools to open oceans, is remarkable."

According to the researchers, there has been growing speculation that cephalopod populations were proliferating in response to a changing environment, based partly on trends in cephalopod fisheries. Cephalopods are known for rapid growth, short lifespans, and extra-sensitive physiologies, which may allow them to adapt more quickly than many other marine species.

To investigate long-term trends in cephalopod abundance, Doubleday and her colleagues assembled global time series of cephalopod catch rates (catch per unit of fishing or sampling effort) from 1953 to 2013. The study included 35 cephalopod species or genera representing six families. The data show that cephalopods, of many different types living all over the world, are on the rise.

The ecological and socio-economic ramifications associated with this increase in cephalopods are much less clear and are likely to be complex, according to the researchers.

"Cephalopods are voracious and adaptable predators and increased predation by cephalopods could impact many prey species, including commercially valuable fish and invertebrates," they write. "Conversely, increases in cephalopod populations could benefit marine predators which are reliant on them for food, as well as human communities reliant on them as a fisheries resource."

What may happen to cephalopod populations in the future is difficult to predict, particularly if fishing pressure continues to increase. Doubleday says that they are now investigating the factors responsible for cephalopods' proliferation.

"It is a difficult, but important, question to answer, as it may tell us an even bigger story about how human activities are changing the ocean," she says.

The research, funded by the Environment Institute at the University of Adelaide, was the result of a workshop involving researchers all over the world.

In changing oceans, cephalopods are booming 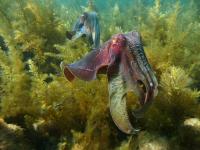