In the natural world, mimicry isn't entertainment; it's a deadly serious game spanning a range of senses - sight, smell and hearing. Some of the most striking visual mimics are butterflies. Many butterflies become noxious and unpalatable to predators by acquiring chemical defences from plants they ingest as caterpillars. Other butterflies mimic the 'aposematic' or warning colouration and conspicuous wing patterns of these toxic or just plain foul-tasting butterflies.

In a new study, scientists from the National Centre for Biological Sciences (NCBS), Bangalore and the National University of Singapore (NUS) investigate how well butterfly mimics resemble their aposematic models.

Shiyu Su, a PhD student advised by Krushnamegh Kunte from NCBS and Matthew Lim from NUS, investigated mimetic butterfly communities called 'butterfly rings' from the Western Ghats of India. Since butterflies are often eaten by insectivorous birds, her aim was to understand how similar mimics were to their aposematic models when perceived through the eyes of bird predators.

The research, which is published in the November issue of the journal Evolution, reveals some fascinating forces driving the evolution of butterfly wing mimicry. The first result in the study indicates that female butterflies are generally better mimics than males.

"Female butterflies carry heavy loads of eggs, which impairs their escape flight when they are attacked by birds and other predators. Because of this risk of predation, female butterflies are under intense natural selection to be very good mimics. Therefore, it makes sense that females are better mimics than males", explains Kunte.

Male wing patterns, on the other hand, are also likely to be under sexual selection since females often prefer brighter, more flamboyant mates. This could be one of the reasons why males may not be such good mimics. In extreme cases, the two opposing forces of natural selection on females and sexual selection on males may lead to male and female butterflies of the same species ending up looking radically different, i.e. sexually dimorphic. This is essentially what happens in female-limited mimicry, where females are mimetic, whereas males are not.

However, the intermingling of genes when males and females mate leads to a kind of stalemate in the evolution of wing patterns. In other words, genetic correlations between the sexes (because of mating) constrains the ability of females to become better mimics, just as it restrains males from becoming too ostentatious. So, one could expect that in dimorphic species, females wouldn't be very good mimics.

Therefore, the second result of the study - that female-limited mimics were still excellent mimics - was rather surprising. The authors hypothesise that perhaps natural selection in this system is strong enough to overpower the dilution effects of genetic correlations.

Apart from acting in a sex-specific manner, natural selection on mimicry could also act differently on the different surfaces of the wing. Since upper wing surfaces are exposed during flight and are likely to be spotted by birds in flight, one would expect that the upper surfaces would be better mimics than ventral wing surfaces. Therefore, the third result in this study - that lower sides of wings are closer mimics of models than the upper sides - is also intriguing.

In hindsight, the reasons for this could be many - one of which is simply that bird predation on butterflies at rest (when their wings are folded and the undersides are visible) is a very strong driving force on mimicry.

Were these patterns expected?

"Yes and no", says Kunte. "Although the first result was easy to understand, the other two results were surprisingly counter to expectations. This paper throws open new questions about the evolution of mimicry and the selective forces that influence the evolution of butterfly wing patterns. Many of these questions are amenable to experimental analysis and we hope to have some more answers soon", he adds.

About the paper: The paper titled "Prey from the eyes of predators: Color discriminability of aposematic and mimetic butterflies from an avian visual perspective" was published in November in the journal Evolution, and can be accessed here http://onlinelibrary.wiley.com/doi/10.1111/evo.12800/abstract

Butterfly mimicry through the eyes of bird predators 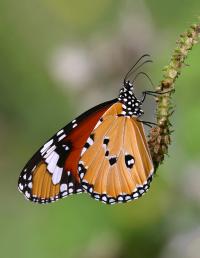