Just as beneficial microbes in the human gut can be affected by antibiotics, diet interventions and other disturbances, the microbiomes of other animals can also be upset. In a rare study published this week, Andrea Jani, a researcher with the University of Hawai'i at Mānoa School of Ocean and Earth Science and Technology (SOEST), determined the skin microbiome of an endangered frog was altered when the frogs were infected by a specific fungus, and it didn't recover to its initial state even when the frog was cured of the infection.

All animals host symbiotic microbes--many of which are beneficial--within and on their bodies. For optimal health, this microbial community needs to remain robust and fairly stable, either by resisting change or by recovering effectively after a disruption. Some infectious diseases disrupt the microbiome, but very little is known about what happens after the host is cleared of infection.

Batrachochytrium dendrobatidis (Bd) is a fungus that infects the skin of amphibians and since its discovery just over two decades ago, Bd has emerged as a global threat to amphibians. This pathogen has affected hundreds of species and driven massive population declines, including 90 presumed species extinctions--representing the greatest known disease-induced biodiversity loss.

Jani led a team of researchers from the San Francisco Zoological Society, Sequoia and Kings Canyon National Parks, USDA Forest Service and the University of California to study the skin microbiome of the mountain yellow-legged frog (Rana muscosa), an endangered species in the Sierra Nevada in California.

"Many populations of these frogs have been wiped out by Bd infection, and the fate of remaining populations will depend largely on their ability to survive despite the presence of the pathogen," said Jani.

Researchers and conservation managers have tested immunization as a method to protect the frogs. Frogs were taken into captivity, deliberately infected with the pathogen, and then cleared of their infections using antifungal drugs, in an attempt to train their immune systems to recognize and fight the pathogen. The frogs are then released back to the wild.

During one of these trials, Jani sampled the skin microbiomes of the frogs before they were exposed to the pathogen, after they were infected, and again after they had been cleared of infection. She then used genetic sequencing technologies to identify the bacteria present.

"We found that Bd infection disturbed the frog microbiome by altering the relative abundances of core bacterial species, just as we had observed in previous research," said Jani. "But surprisingly, when the frogs were cleared their infections, their microbiomes did not recover. In other words, removing the cause of the microbiome disturbance was not enough to bring about recovery from the disturbance."

Establishing whether the microbiome can be resilient after disease is important to a basic understanding of microbiome dynamics, as well as the effects of infectious diseases.

Bacteria inhabiting the skin of amphibians have the potential to provide some resistance to disease conditions. Some researchers are exploring whether probiotics can protect wild amphibians, especially endangered species.

"We would hope that the microbiome can act as a 'body guard,' but that possibility may be compromised if a Bd infection can change the microbiome itself," said Jani.

"Among the key unanswered questions are whether and how the disturbance to the microbiome affects the functions it provides for the host," she added. "In our recent study, we found that greater shifts in the microbiome were linked to greater weight loss by the frogs, which suggests--but doesn't prove--that microbiome change may have been detrimental. As with many microbiome studies, it can be very difficult to tease apart cause and effect."

Hawai'i is home to a wealth of endemic biodiversity, but also has one of the highest extinction rates on the planet. Although Hawai'i has no native amphibians, infectious diseases have decimated and continue to threaten Hawaiian species, such as the iconic O'hia and several forest bird species.

With a wide variety of microbiome research being conducted in Hawai'i, the UH Mānoa Center for Microbiome Analysis through Island Knowledge and Investigation (CMAIKI) connects microbiome scientists, including Jani, across the islands, furthering collaboration and facilitating new discoveries related to environmental and human health. 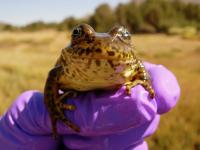