Fossilized feces are common finds at paleontological dig sites and might actually contain hidden treasures. By scanning fossilized dung assigned to a close dinosaur relative from the Triassic period, scientists discovered a 230-million-year-old beetle species, representing a new family of beetles, previously unknown to science. The beetles were preserved in a 3D state with their legs and antennae fully intact. The finding appears June 30 in the journal Current Biology.

The discovery that fossilized droppings, also known as coprolites, can preserve ancient insect species offers a new alternative to amber fossils--fossilized tree resin, which normally yield the best-preserved insect fossils. The oldest insect fossils from amber, however, are approximately 140-million-years old, and thus from relatively recent geological times. With coprolites, researchers can now look even further into the past, allowing them to learn more about insect evolution and food webs of yet unexplored time intervals.

"We didn't know how insects looked in the Triassic period and now we have the chance," says Martin Fikáček (@fikacek_martin), an entomologist at National Sun Yat-sen University, Taiwan and a co-author on the paper. "Maybe, when many more coprolites are analyzed, we will find that some groups of reptiles produced coprolites that are not really useful, while others have coprolites full of nicely preserved insects that we can study. We simply need to start looking inside coprolites to get at least some idea."

"I was really amazed to see how well preserved the beetles were, when you modeled them up on the screen, it was like they were looking right at you," says first author Martin Qvarnström (@M_Qvarnstroem), a paleontologist at Uppsala University, Sweden and a postdoctoral fellow in the lab of Per Ahlberg. "This is facilitated by coprolites' calcium phosphatic composition. This together with early mineralization by bacteria likely helped to preserve these delicate fossils."

The research team named the new beetle species Triamyxa coprolithica, which refers to its Triassic age and indicating that it belongs to the suborder Myxophaga--whose modern rep-resentatives are small and live on algae in wet environments--and that it was found in a cop-rolite. Triamyxa likely lived in semiaquatic or humid environments and were likely consumed by Silesaurus opolensis--the probable producer of the coprolite--a beaked dinosaur ancestor about 2 meters long and 15 kilograms that lived in what is now Poland at the same time.

"Although Silesaurus appears to have ingested numerous individuals of Triamyxa coprolithi-ca, the beetle was likely too small to have been the only targeted prey," says Qvarnström. "Instead, Triamyxa likely shared its habitat with larger beetles, which are represented by disarticulated remains in the coprolites, and other prey, which never ended up in the copro-lites in a recognizable shape. So it seems likely that Silesaurus was omnivorous, and that a part of its diet was comprised of insects."

The coprolite was scanned using synchrotron microtomography at the European Synchrotron Radiation Facility (ESRF) in Grenoble, France. The method, which works like a CT scanner in a hospital except with strong x-ray beams, makes it possible to visualize internal structures in fossils in three dimensions with great contrast and resolution,

"So if you find an insect in the coprolite, you can scan it using microCT in the same way as we do with amber insects, and you can see all the tiny details of the insect body as we do in amber," says Fikáček. "In that aspect, our discovery is very promising, it basically tells people: 'Hey, check more coprolites using microCT, there is a good chance to find insects in it, and if you find it, it can be really nicely preserved.'"

"There are heaps of things you can study based on fossilized droppings but it had been hard to understand what to do with it, hard to recognize what is inside, and hard to draw conclusions from it, but now there are tons of data," says Qvarnström. "The ultimate goal is to use the coprolite data to reconstruct ancient food webs and see how they changed across time."

The authors received financial support from the Ministry of Culture of the Czech Republic, CONACyT, Mexico, the Knut & Alice Wallenberg Foundation the E. and K.G. Lennanders Foundation. 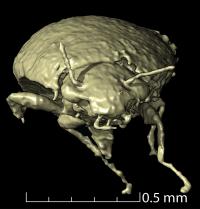