When NASA's Aqua satellite passed over the Eastern Pacific Ocean, water vapor data provided information about the intensity of Hurricane Rosa. On Sept. 28, Rosa is a major hurricane, now a Category 4 on the Saffir-Simpson Hurricane Wind Scale.

Twelve hours before the MODIS water vapor imagery, the Atmospheric Infrared Sounder instrument aboard NASA's Aqua satellite provided temperature data on the cloud tops on Sept. 27 at 4:41 p.m. EDT (2041 UTC). Coldest cloud top temperatures were as cold as or colder than minus 70 degrees Fahrenheit (minus 56.6 degrees Celsius) around the eye and confirmed the later MODIS data.

Maximum sustained winds are near 145 mph (230 kph) with higher gusts. Rosa is a category 4 hurricane on the Saffir-Simpson Hurricane Wind Scale. Little significant change in strength is forecast today, with gradual weakening anticipated by Saturday, and further weakening at a faster rate expected early next week.

NHC said although Rosa is not near the coast, swells generated by Rosa will affect portions of the coasts of southwestern Mexico, the southern Baja California Peninsula, and southern California late this week and over the weekend. These swells are likely to cause life-threatening surf and rip current conditions. 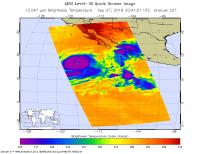