Scientists broadly agree that global warming may threaten the survival of many plant and animal species; but global warming did not kill the Monteverde golden toad, an often cited example of climate-triggered extinction, says a new study. The toad vanished from Costa Rica's Pacific coastal-mountain cloud forest in the late 1980s, the apparent victim of a pathogen outbreak that has wiped out dozens of other amphibians in the Americas. Many researchers have linked outbreaks of the deadly chytrid fungus to climate change, but the new study asserts that the weather patterns, at Monteverde at least, were not out of the ordinary.

The role that climate change played in the toad's demise has been fiercely debated in recent years. The new paper, in the March 1 issue of the Proceedings of the National Academy of Sciences, is the latest to weigh in. In the study, researchers used old-growth trees from the Monteverde Cloud Forest Reserve to reconstruct moisture levels in that region over the last century. They expected to see global warming manifested in the form of a long-term warming or drying trend, but instead discovered that the forest's dry spells closely tracked El Niño, the periodic and natural warming of waters off South America that brings drought to some places and added rainfall and snow to others.

The golden toad vanished after an exceptionally dry season following the 1986-1987 El Niño, probably not long after the chytrid fungus was introduced. Scientists speculate that dry conditions caused the toads to congregate in a small number of puddles to reproduce, prompting the disease to spread rapidly. Some have linked the dry spell to global warming, arguing that warmer temperatures allowed the chytrid pathogen to flourish and weakened the toad's defenses. The new study finds that Monteverde was the driest it's been in a hundred years following the 1986-1987 El Niño, but that those dry conditions were still within the range of normal climate variability. The study does not address amphibian declines elsewhere, nor do the authors suggest that global warming is not a serious threat to biodiversity.

"There's no comfort in knowing that the golden toad's extinction was the result of El Niño and an introduced pathogen, because climate change will no doubt play a role in future extinctions," said study lead author Kevin Anchukaitis, a climate scientist at Columbia University's Lamont-Doherty Earth Observatory.

Average global temperatures have climbed about 0.8 degrees (1.4 degrees F) in the past hundred years, and some studies suggest that mountain regions are warming even more. In search of favorable conditions, alpine plants and animals are creeping to higher altitudes—not always with success.

In a 2006 paper in Nature, a team of U.S. and Latin American scientists linked rising tropical temperatures to the disappearance of 64 amphibian species in Central and South America. They proposed that warmer temperatures, associated with greater cloud cover, had led to cooler days and warmer nights, creating conditions that allowed the chytrid fungus to grow and spread. The fungus kills frogs and toads by releasing poison and attacking their skin and teeth. "Disease is the bullet killing frogs, but climate change is pulling the trigger," the lead author of the Nature study and a research scientist at the Monteverde reserve, J. Alan Pounds, said at the time.

The new study in PNAS suggests that it was El Niño—not climate change—that caused the fungus to thrive, killing the golden toad. "El Niño pulled the trigger," said Anchukaitis

Proving a link between climate change and biodiversity loss is difficult because so many overlapping factors may be at play, including habitat destruction, introduction of disease, pollution and normal weather variability. This is especially true in the tropics, because written weather records may go back only a few decades, preventing researchers from spotting long-term trends.

In the last decade, scientists have improved techniques for reconstructing past climate from tiny samples of wood drilled from tropical trees. Unlike trees in northern latitudes, tropical trees may grow year round, and often do not form the sharply defined growth rings that help scientists differentiate wet years from dry years in many temperate-region species. But even in the tropics, weather can leave an imprint on growing trees. During the dry season, trees take up water with more of the heavy isotope, oxygen-18, than oxygen-16. By analyzing the isotope ratio of the tree's wood, scientists can reconstruct the periods of rainfall and relative humidity throughout its life.

On two field trips to Costa Rica, Anchukaitis sampled nearly 30 trees, looking for specimens old enough, and with enough annual growth, to be studied. Back in the lab, he and study co-author Michael Evans, a climate scientist at University of Maryland, analyzed thousands of samples of wood trimmed to the size of pencil shavings.

Their results are only the latest challenge to the theory that climate change is driving the deadly chytrid outbreaks in the Americas. In a 2008 paper in the journal PLoS Biology, University of Maryland biologist Karen Lips mapped the loss of harlequin frogs from Costa Rica to Panama. She found that their decline followed the step-by-step pattern of an emerging infectious disease, affecting frogs in the mountains but not the lowlands. Had the outbreak been climate-induced, she said, the decline should have moved up and down the mountains over time.

Reached by e-mail, Pounds said he disagreed with the PNAS study. He said that his own 40-year rainfall and mist-cover measurements at Monteverde show a drying trend that the authors missed because they were unable to analyze moisture variations day to day or week to week. The weather is becoming more variable and extreme, he added, favoring some pathogens and making some animals more susceptible to disease.

"Anyone paying close attention to living systems in the wild is aware that our planet is in serious trouble," he said. "It's just a matter of time before this becomes painfully obvious to everyone."

Scientists think climate change may drive plants and animals to extinction by changing their habitats too quickly for them to adapt, shrinking water supplies, or by providing optimal conditions for diseases. Researchers have established links between population declines and global warming, from sea-ice dependent Adelie and emperor penguins, to corals threatened by ocean acidification and warming sea temperatures.

Warming ocean temperatures are likely to have some effect on El Niño, but scientists are still unsure what they will be, said Henry Diaz, an El Niño expert at the National Oceanographic and Atmospheric Agency. He said the paper offers strong evidence that climate change was not a factor in the El Niño dry season that coincided with the golden toad's extinction. "Climate change is best visualized as large-scale averages," he said. "Getting down to specific regions, Costa Rica, or the Monteverde cloud forest, it's hard to ascribe extinctions to climate change."

A list of FAQs can be reviewed here:
http://www.ldeo.columbia.edu/~kja/monteverde/ 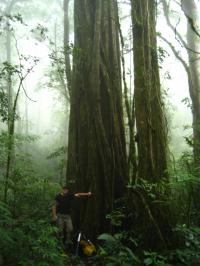 Trees in the Monteverde Cloud Forest