The long-necked, big bodied sauropod dinosaurs comprise some of the largest terrestrial vertebrates to walk the earth. These behemoths were herbivores that survived solely on plant material. There has been long speculation as to what food resources could have supported their size, particularly when young and growing fast. New research being presented at this year's annual meeting of the Society of Vertebrate Paleontology held this year in Brisbane, Australia by lead author, Carole Gee, University of Bonn, Germany, points to a plant commonly known as the horsetail.

Equisetum is a spore-bearing plant commonly known as the "scouring rush" or "horsetail," and close relatives of the modern genus are known in the fossil record as far back as the Triassic. Gee and co-authors studied the digestive fermentation and comparative calorie yield of seven extant species of Equisetum for living herbivores using a standardized feed evaluation test. Their data confirm earlier studies that suggest Equisetum was an important, highly digestible, nutritious, and therefore preferred food source for herbivorous dinosaurs in Mesozoic times. "My approach to understanding the paleobiology of ancient plants and deep-time plant-animal interactions is not only to look at paleontology, but also to include studies of living plants and their ecology, as well as the dietary habits of living animals," says Gee.

In this study, Gee and her colleagues turn their attention to the diets of hatchling and young sauropods, as well as other small-stature herbivorous dinosaurs. "Up to now, plants used as likely food resources have only been studied for fully-grown sauropods," Dee stated. Young and growing sauropods grow very quickly, recognizing the value of Equisetum as a major food source for young and growing sauropods is extremely important in learning more about their growth. Gee and her colleagues began research on the comparative value of the nearest living relatives of the Jurassic flora as dinosaur fodder about a decade ago within the framework of a Research Unit on the Biology of the Sauropod Dinosaurs, funded by the German Research Foundation. 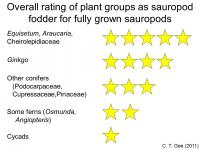