The snapping claws of male amphipods--tiny, shrimplike crustaceans--are among the fastest and most energetic of any life on Earth. Researchers reporting in the journal Current Biology on February 8 find that the crustaceans can repeatedly close their claws in less than 0.01% of a second, generating high-energy water jets and audible pops. The snapping claws are so fast, they almost defy the laws of physics.

"What's really amazing about these amphipods is that they're sitting right on the boundary of what we think is possible in terms of how small something can be and how fast it can move without self-destructing," says senior author Sheila Patek, a Professor of Biology at Duke University. "If they accelerated any faster, their bodies would break."

While amphipods are tremendous athletes, they aren't much to look at. They are tiny--only a few millimeters long--and they thrive in cool, scummy water, where they live on a diet of dead algae, seaweed, and other plants and animals.

"They're hard to see, but when you get them under a microscope, it's like the New York City of algae, with all these little creatures interacting and moving in every which way," says Patek. "It's like something out of the movie Microcosm."

Getting acceleration measurements of something so small and so fast is no easy task. The researchers used a highly specialized ultra-high-speed camera and enticed the aggressive crustaceans to snap by dangling single human hairs in front of them.

"It was a huge effort to capture this motion. We couldn't do it in the field because the equipment is so expensive and specialized--basically the Maserati of cameras," says Patek. "Once we could capture it, we saw that they're actually generating a water jet when they snap."

These water jets can occasionally cause cavitation--or the formation of bubbles from rapid changes in water pressure. When cavitation bubbles pop, large amounts of energy are released, enough to degrade the steel used in boat propellers.

"Cavitation is an extremely potent effect. It's one of the most energetic events on planet Earth," says Patek. "It's remarkable that these tiny creatures can cause it."

Although the researchers were able to quantify the mechanics of the amphipod snaps, it remains a mystery exactly why they do it.

"The claws make up a third of a male's body weight," says Patek. "We want to know why they invest so much into this action, whether it plays into male-female interaction or territorial disputes. That's something we're excited to pursue."

The researchers also hope that exploring creatures such as amphipods that push physics to the limit might provide inspiration to engineers and designers.

"There's a two-way street between engineering and biology. Sometimes we discover something in nature that engineering can't do, and sometimes engineers help us figure out how something works in nature," says Patek. "It's important to think about design from an evolutionary perspective because life has had millions of years to get it right."

This work was supported by the Army Research Office, an element of the U.S. Army Combat Capabilities Development Command's Army Research Laboratory.

These shrimplike crustaceans are the fastest snappers in the sea 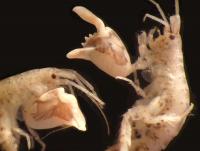