Run-of-river dams are deemed "green energy" because they produce lower greenhouse gas emissions, have lower water storage, barrier size, extent of flooding and water level fluctuations than conventional hydropower facilities. They divert part of a stream through turbines before returning it to the stream downriver. The impact this process has on the ecosystem is unknown, particularly with regards to the production of methylmercury as a result of the dam and the disruption of natural flows. RoR dams can cause a spike in methylmercury in two ways - they can form small reservoirs, called headponds, which flood soil and create slow-flowing, low-oxygen environments; or they can create higher temperatures in the stream as a result of the reduced flow conditions when portions of the stream are diverted to the turbines.

American dippers are river birds that live along fast-moving mountain streams and are considered an excellent indicator of stream quality. While some populations migrate up and down the mountain streams, they are strictly aquatic feeding on underwater insects and salmon eggs and fry that can accumulate methylmercury and biomagnify it up the food chain. All of that combined makes the American dipper a suitable indicator of stream quality and contaminant exposure.

Author Veronica Silverthorn and her colleagues sampled American dipper blood and feathers in coastal British Columbia to assess the bird's diet and mercury levels. The blood samples showed birds on regulated streams were feeding more in the run-of-river headponds, but there were no significant differences in mercury levels between dippers at run-of-river regulated streams compared with those at unregulated streams. Overall, dippers had higher mercury levels than most other songbirds tested in western North America, which may be due to more atmospheric deposition of mercury in snow at these high elevations. Silverthorn notes that future studies should "monitor mercury concentrations of the entire food-web before and after the RoR regulation, both upstream and downstream of the intake since there is high potential for methylmercury production in these systems that may change over time."

Are elevated levels of mercury in the American dipper due to run-of-river dams? 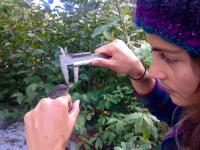