Coral reefs have thrived for millions of years in their shallow ocean water environments due to their unique partnerships with the algae that live in their tissues. Corals provide a safe haven and carbon dioxide while their algal symbionts provide them with food and oxygen produced from photosynthesis. Using the corals Orbicella annularis and Orbicella faveolate in the southern Caribbean, researchers at the Carl R. Woese Institute for Genomic Biology (IGB) have improved our ability to visualize and track these symbiotic interactions in the face of globally warming sea surface temperatures and deepening seawaters.

"Corals are one of the most resilient organisms on the planet," said Mayandi Sivaguru, the co-lead author of the study and Assistant Director of Core Facilities at the IGB. "They have survived ice ages, greenhouse conditions with no ice, and everything else in between that the planet has thrown at them."

Although they have a long history of weathering disruptions, coral reefs are also sensitive enough to serve as indicators of climate change and oceanic health. As an example, when the sea surface temperature or the seawater acidity increases, corals eject their algal partners--a phenomenon called coral bleaching--which converts the corals from green to white. To understand why bleaching occurs, it is important to visualize how the corals interact with their algal partners.

Previously, researchers had to peel the skin of corals and place the samples in a blender to study their symbiotic algal partners. The current study uses a non-invasive technique instead. "We collect small samples of corals on the living reef, bring them back to Illinois, and look at them under the microscope without further processing. Two-photon microscopy allows us to look at their three-dimensional structure, and determine how many algae and what biomolecules are present," Sivaguru said. The technique uses light to scan living tissues, allowing the researchers to keep the corals in their original growth structure.

The researchers used these new methods to compare the symbionts in two environmental contexts. The first was from shallow to deeper seawater and the second was between seasonal warm-to-cool changes in sea surface temperatures. "In addition to analyzing the number of symbionts in the coral tissues, which the corals can alter, we also tracked simultaneous changes in mucus and biomolecules produced by the corals, some of which serve as a natural sun block," Sivaguru said.

The microscopy studies revealed that shallow water corals have lower algal concentrations and produce higher levels of chromatophores, which are biomolecules that protect algae from sunlight damage. On the other hand, the researchers found the opposite pattern in deeper water corals. These corals receive lesser sunlight and would therefore require more algae to keep up with the photosynthetic demand. During seasonal sea surface temperature changes, the warmer water caused decreased mucus production and algal concentrations, but increased photosynthesis and coral skeleton growth. Conversely, cooler waters caused the opposite effect.

"We have combined the results of this study to identify universal mechanisms of biomineralization found between water, microbes, living organisms, and rock," said Lauren Todorov, the co-lead author, who completed this research as part of her undergraduate B.Sc. thesis at Illinois and is now completing her M.Sc. in Geology. "This study has allowed us to establish a comprehensive understanding of the coral system as well as make connections to the formation of layered rock in other systems such as hot springs, roman aqueducts, and even human kidney stones."

"This project required several years to complete and required virtually all of the microscopes available in the IGB Core Facilities. Importantly, our research team included several students who worked on the project starting in high school and continued as part of their undergraduate and graduate research in institutions across the United States. This included fieldwork in Curaçao and well as work at the IGB," said Bruce Fouke (BCXT), a professor of geology and microbiology at the IGB.

The study "Corals regulate the distribution and abundance of Symbiodiniaceae and biomolecules in response to changing water depth and sea surface temperature" was published in Scientific Reports and can be found at https://www.nature.com/articles/s41598-021-81520-0. 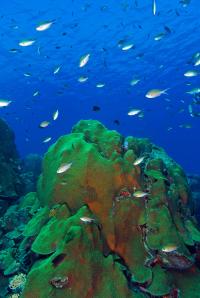