Currently, the study of the effects of ionizing radiation is of great relevance in the context of the challenges in the field of agriculture development, the existence of zones with an elevated natural and man-made radiation background, and the need to develop space biology.

At the same time, this type of radiation can be successfully used for developing new varieties of agricultural plants, pre-sowing seed treatment and solving other general biological tasks aimed at establishing general patterns and peculiarities of ionizing radiation effects on various living organisms.

To date, a large amount of data has been accumulated and summarized about the effects of ionizing radiation on plant growth and reproduction, as well as on changes caused by ionizing radiation at the genetic level. At the same time, there is a significant gap in understanding the mechanisms of the influence of ionizing radiation on the activity of biochemical and physiological processes, despite the fact that it is at this level that the basis is formed, due to which all effects appear at the level of the whole organism.

According to Professor Vladimir Vodeneev, Head of the Department of Biophysics at Lobachevsky University, the activity of physiological processes, on the one hand, determines the growth of plants, and on the other, is determined by changes at the genetic level. Thus, the study of the physiological and biochemical effects of ionizing radiation can give the most complete and comprehensive picture of the effect of ionizing radiation on plants.

"In the present study, attention is focused on the effect of radiation on the most important physiological processes, including photosynthesis, respiration, long-range transport, the functioning of the hormonal system, and biosynthesis of various compounds. Based on a large amount of experimental data, an analysis was performed of the dose and time dependences of ionizing radiation effects, which show qualitative similarity in relation to various physiological and biochemical processes. The sequence of the stages of these processes, their mechanisms and cause-effect relationships between them were examined," Vladimir Vodeneev notes.

Primary physico-chemical reactions caused by ionizing radiation, including the formation of various reactive oxygen species (ROS), are the cause of the changes in the functional activity of plants. The study emphasized the role of the long-lived form of ROS, hydrogen peroxide, that mediates the effect of ionizing radiation. It acts not only as a damaging molecule, but also as a universal intracellular messenger and a molecule playing the role of a long-range signal. In other words, not only negative factors of ROS influence on plants have been shown, but also some positive aspects of ROS as a source of information transfer at the molecular level.

Nizhny Novgorod scientists have suggested that the influence of ionizing radiation on physiological processes occurs mainly through dysregulation of their activity. Such a dysregulation is apparently due to the existence of a cross-talk between plant signaling systems, such as ROS, calcium, hormonal and electrical systems.

An increase in the level of ROS induced by both acute and chronic irradiation may affect the activity of a wide range of physiological processes through regulation both at the genetic and physiological levels, which ultimately affects the process of plant adaptation to changing environmental conditions.

The obtained results open up a new stage in studying the possibilities of plant survival under the influence of various adverse factors, including extreme conditions of outer space.

Radiation and plants: From soil remediation to interplanetary flights 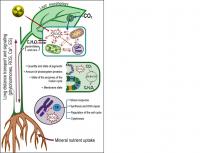