Daejeon, Republic of Korea, May 8, 2013 -- Most car drivers have had the experience of hearing a buzzing, squeaky, or rattling sound while driving but not being able to figure out where the noise is coming from. The problem could be simple, requiring a quick fix, or could be serious enough to bring a car to a mechanic. If it is possible to identify the origin of the noise, the problem becomes a lot easier to solve. A sound camera, which visualizes sound in color contours similar to the way a thermal camera displays temperature with visual images, can be an ideal tool to pinpoint the exact location where the noise is being generated.

Professor Seok-Hyung Bae from the Department of Industrial Design at KAIST, together with SM Instruments, Inc., a venture company established by a KAIST graduate Young-Key Kim, developed a handheld sound camera, which is the first of its kind in the world, to easily detect noises arising from such sources as heavy machinery, home appliances, vehicles, and vessels. The sound camera, SeeSV-S205, is light enough to hold in one hand and weighs only 1.78kg with 39 cm width and 38 cm height.

The pentagonal-shaped camera has five spiral arrays of 30 highly sensitive digital microphones to detect transient and stationary noise sources accurately by utilizing FPGA-based high-speed beamforming technology. With a high-resolution optical camera installed in its center, SeeSV-S205 is capable of capturing 25 sound plus visual images per second.

The three ergonomically designed grips at the back of the camera provide excellent usability and mobility, allowing users to freely move it around to locate noise sources at various areas including the insides of machines and cars. Unlike existing models of sound cameras that are bulky and heavy and that require the assembly of multiple components to be installed on a tripod, SeeSV-S205 is a unibody, hence no need of assembly or a tripod. For its innovative design, last February, SeeSV-S205 won a Red Dot Award: Product Design 2013, one of the three most prestigious international design awards in the world.

"Abnormal noises coming from industrial products have relatively higher frequencies. Our model, SeeSV-S205, has adopted a measurement range of high frequencies between 350 Hz to 12 kHz, thereby reducing its size and weight by 60 % and 70 %, respectively, without compromising performance compared to conventional models of sound cameras," Professor Bae explained.

"SeeSV-S205 offers portability, which I believe will spur the wider application of our sound camera to many industries, auto manufacturing in particular," added Professor Bae. 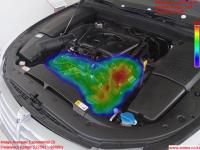