Temporary bans on fishing can be better than permanent ones as a way of allowing fish stocks in an area to recover, while still providing enough to eat, a research team has found.

A new study published in the Journal of Applied Ecology by researchers from the California Polytechnic State University San Luis Obispo (Cal Poly), WCS (Wildlife Conservation Society), Swansea University, the University of Rhode Island (URI) and other groups has revealed that the challenge of keeping fish in the sea while putting fish on the plate might be best achieved through fishing grounds with closures that are periodically subject to pulse harvests.

At the crux of the matter is the current model of fishing closures. Conservationists have argued that permanently closed, no-take MPAs are an effective means of mediating overfishing and allowing stock replenishment, and many global conservation agencies are thus calling on high levels of protection in 30% of the world's oceans.

However, MPAs can shift fishing effort into remaining fishing grounds. More crowded fishing grounds can make it harder to find fish, thus reducing catch efficiency and driving up costs for the industry to maintain steady yields. Therein lies a wicked tradeoff, where managers seemingly need to balance competing objectives for keeping fish in the sea and fish on the dinner plate.

The researchers considered a third management strategy that is commonly implemented by small-scale fishers across the Pacific, who periodically open their fisheries closures to pulse harvests, similar to a rotational harvest model. Like permanent no-take MPAs, these "periodic closures" temporarily displace fishing effort and thus can promote stock recovery during the intervals while they are closed.

Most importantly, however, many of the fish protected within the closure become less wary of fishing gear, giving large boosts to harvest efficiency when the closures are temporarily opened.

The researchers developed innovative bioeconomic fisheries models that incorporated this documented fish behavioral response to protection. They found that in a well-managed fishery, simulated fishing grounds with periodic closures outperformed those with non-spatial management and permanently closed MPAs for achieving the triple bottom-line objectives of simultaneously supporting high yields, stock abundance and harvest efficiency. The outcomes were maximized with closures for 1-2 year periods, followed by pulse harvests within a single year.

Dr. Fraser Januchowski-Hartley at Swansea University further explained, "While recreational and small-scale fishers across the world know that fish behavior can change because of fishing and protection, it normally isn't included in management models. These results show the importance of considering changing fish behavior and its impact on catch when designing fisheries management regimes."

In fact, the only scenarios where periodic closures did not come out on top were under extreme overfishing, where the harvest efficiency benefit was too small for the periodic closure strategy to best meet the three objectives compared with permanent no-take MPAs.

"Less than 25% of global fisheries are currently characterized by this extreme level of overfishing," explains Prof. Crow White of CalPoly. "For these fisheries, permanent no-take MPAs may be critical for any chance at stock recovery. For the remaining three-fourths, periodic closures should be considered as an option to balance conservation and sustainable development needs for the fishing sector."

These sentiments are echoed by Dr. Stacy Jupiter, WCS Melanesia Regional Director, "For many years, we have been arguing that management undertaken by small-scale fishers in the Pacific Islands is more than just a niche practice. This study validates that conclusion, and provides credence to a management tool that is incredibly important for local cultural practice. I believe these findings will have real impacts on how people around the globe implement fisheries management so that they can have their fish in the water and eat them too."

This study was supported by a grant from the David and Lucile Packard Foundation to the Wildlife Conservation Society and a National Science Foundation Graduate Fellowship Research Award to the lead author.

When reporting this story, please use Swansea University hyperlinks. Swansea University is a world-class, research-led, dual campus university offering a first class student experience and has one of the best employability rates of graduates in the UK.

The University has the highest possible rating for teaching - the Gold rating in the Teaching Excellence Framework (TEF) in 2018 and was commended for its high proportions of students achieving consistently outstanding outcomes.

Swansea University is a registered charity. No.1138342.

How to keep fish in the sea and on the plate 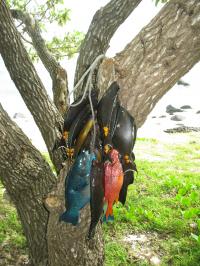 Catch Landed during a Periodic Harvest in Vanuatu 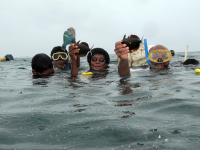