The door to the digital Universe has been flung open! Mitaka, a free downloadable software program to visualize the Universe based on real astronomical data, now accommodates a variety of the languages found on planet Earth. With this upgrade, many people all over the globe can use a PC to navigate through the digital Universe in their native language.

The Four-Dimensional Digital Universe (4D2U) Project of the National Astronomical Observatory of Japan (NAOJ) was launched in 2001. This project aims to visualize the latest astronomical data obtained by observations and numerical simulations. The 4D2U project has developed various contents visualizing the Universe, including the software known as "Mitaka" and dozens of movie clips. These contents are regularly shown in the 4D2U Dome Theater in the NAOJ Headquarters. They are also very popular among schools and science museums in Japan and other countries. At the 3D theater of the 'Imiloa Astronomy Center in Hilo, Hawai'i, the 4D2U contents are on permanent display and have received a favorable reception from audiences. However, until now Mitaka has been available only in Japanese and English. There have been many requests from various countries for the multilingualization of Mitaka.

In the latest version of Mitaka, ver.1.3, the displayed language is defined by several external files. Users can modify the files to change the language to any one they would like, not only languages using the Latin alphabet, but also including other character sets defined in Unicode, such as Brahmic, Chinese, Cyrillic, and Hangeul. Right-to-left scripts such as Arabic, will be supported in future versions of Mitaka. "In the future, we will increase the number of language information files contained in the default version of Mitaka" said Tsunehiko Kato, the developer of Mitaka. "If a language is not contained in the default version, anyone can create his/her own language files. I really hope that Mitaka will be widely used around the world for educational purposes, live shows, exhibitions, and personal use in many languages."

Various astronomy data are contained in Mitaka: orbits for 20 thousand asteroids; stellar positions based on the Hipparcos and Tycho Catalogues; and galaxies based on the Sloan Digital Sky Survey (SDSS). The structure of the Milky Way Galaxy and the gravitational lens effect of the supermassive black hole in the center of our Galaxy are constructed based on theoretical models. Mitaka also actively incorporates the latest data, such as the surface textures of Pluto and Charon obtained by NASA's New Horizons probe. With Mitaka, users can fly out from the Earth, traveling to the edge of the known Universe.

Mitaka and the movies developed by 4D2U are available free of charge on the project web site. Currently, only three movies are listed on the English page, but more than a dozen movies will be added in the near future. These movies are provided in several formats: flat screen or dome screen (fish-eye) versions, with 2D or 3D options.

"Mitaka" is the name of the city in western Tokyo where the NAOJ Headquarters is located. NAOJ Mitaka Campus houses several historical telescopes, including the 65-cm Refractor built in 1929. It is also home to modern instruments such as the TAMA300 gravitational wave detector, the Solar Flare Telescope, and the special purpose computer GRAPE. 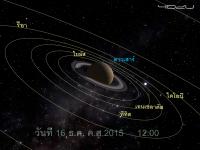