An emerging research method to gauge the benefits of stream restoration for salmon and other native fish is revealing improvements in fish numbers, survival and reproduction in key rivers across the Pacific Northwest, according to a new research paper describing the approach, known as intensively monitored watersheds, or IMWs.

At least 17 IMWs in the Northwest are beginning to provide detailed scientific insight into how the millions of dollars invested in river and stream restoration can most effectively boost fish populations, according to the new paper published this week in Fisheries, the monthly journal of the American Fisheries Society.

"The region is putting great effort into restoring rivers and streams for fish, but what everyone wants to know is, is it working, and how well?" said Stephen Bennett, a research scientist at Utah State University and lead author of the paper that also includes authors from NOAA Fisheries and state fisheries agencies in California, Washington, Oregon, and Idaho. "This is the best method we have for understanding if restoration improves watershed scale productivity, how well it works, and how we can get better at it."

Northwest salmon and steelhead have long suffered from habitat loss and degradation, and restoring that habitat is a key strategy for rebuilding their populations. Climate, ocean conditions, natural variability and other factors also influence their abundance, however, making it difficult to identify and quantify the specific contributions of habitat restoration.

"We're looking for a long-term response to restoration from an animal that can vary widely from year to year," said George Pess, a research biologist at NOAA Fisheries' Northwest Fisheries Science Center and a coauthor of the new paper. He assisted with an IMW that tracked the return of salmon to Washington's Elwha River following the removal of two large dams in 2011.

"You need sufficient time and detail to be able to say, yes, the fish are increasing and, yes, it's because of the improvements in the habitat," he said.

Rivers and streams in IMWs are heavily outfitted with systems to track salmonids from fry to adults to tell how they respond to improvements such as reopening wetlands where young fish rear, removing migration barriers such as dams, and adding woody debris to create more diverse and natural stream habitat. In some cases, antennas buried in stream bottoms detect tiny electronic chips in fish each time they pass by, documenting how many use the restored habitat.

With this rich data set, scientists can discern the benefits of restoration by comparing the numbers to separate "control" streams without restoration.

The new paper identifies the essential elements of intensively monitored watersheds, describes the challenges involved, and reports preliminary results from those already underway, including:

Research in IMWs revealed the importance of salmon diversity in some rivers and streams. For example, scientists had long thought that coho salmon that migrate to the ocean in the fall of their first year do not survive. But IMW studies have revealed that the fall fish may be important contributors to adult returns. The finding demonstrates that such diversity may be important to the long-term resilience of these fish.

While the preliminary findings are promising, scientists say the most valuable data is yet to come. IMWs will help answer the key remaining question: whether the productivity of restored streams increases to the point that successive generations of fish return in larger numbers, eventually rebuilding entire populations throughout watersheds versus only short-term changes within the immediate areas where restoration occurred.

Bennett said the paper published this week is designed to provide other fisheries scientists a baseline understanding of how to develop long-term ecological experiments such as IMWs, including the key challenges involved. For example, scientists must develop a thorough experimental design to gauge the effectiveness of restoration. They must also work with local landowners and watershed groups to coordinate restoration efforts on local rivers in areas and time frames the IMW studies can best detect.

For more information on IMWs and snapshots of results from individual IMWs, visit http://www.pnamp.org/imw/home 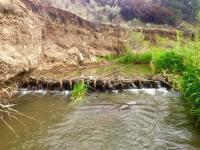