Researchers have helped solve one of the enduring mysteries of the ancient world: why the inhabitants of Madagascar speak Malagasy, a language otherwise unique to Southeast Asia and the Pacific - a region located at least 6,000 km away. An international research team has identified that ancient crop remains excavated from sites in Madagascar consist of Asian species like rice and mung beans. This is thought to be the first archaeological evidence that settlers from South Asia are likely to have colonised the island over a thousand years ago. The findings are published in the journal, Proceedings of the National Academy of Sciences.

Genetic research has confirmed that the inhabitants of Madagascar do indeed share close ancestry with Malaysians, Polynesians, and other speakers of what is classed the Austronesian language family. To date, archaeological research has identified human settlements in Madagascar that belong to the first millennium. There are also findings suggesting that Madagascar may have been occupied by hunter-gatherers who probably arrived from Africa by the first or second millennium. Until now, however, archaeological evidence of the Austronesian colonisation has been missing. The team were able to identify the species of nearly 2,500 ancient plant remains obtained from their excavations at 18 ancient settlement sites in Madagascar, on neighbouring islands and on the eastern African coast. They examined residues obtained from sediments in the archaeological layers, using a system of sieves and water. They looked at whether the earliest crops grown on the sites were African crops or were crops introduced to Africa from elsewhere. They found both types, but noted a distinct pattern, with African crops primarily concentrated on the mainland and the islands closest to the mainland. In Madagascar, in contrast, early subsistence focused on Asian crops. The data suggested an introduction of these crops, both to Madagascar and the neighbouring Comoros Islands, by the 8th and 10th century.

Senior author Dr Nicole Boivin, from the School of Archaeology at the University of Oxford and Director of the Department of Archaeology at the Max Planck Institute for the Science of Human History, said: 'Southeast Asians clearly brought crops from their homeland and grew and subsisted on them when they reached Africa. This means that archaeologists can use crop remains as evidence to provide real material insights into the history of the island. There are a lot of things we still don't understand about Madagascar's past; it remains one of our big enigmas. But what is exciting is that we finally have a way of providing a window into the island's highly mysterious Southeast Asian settlement and distinguishing it from settlements by mainland Africans that we know also happened.'

The analyses also suggest that Southeast Asians colonised not only Madagascar but also the nearby islands of the Comoros, because again the crops that grew there were dominated by the same Asian species. By contrast, crops identified on the eastern African coast and near coastal islands like Mafia and Zanzibar were mainly African species like sorghum, pearl millet and baobab.

Commenting on the Southeast Asian influence in the Comoros, study lead author Dr Alison Crowther, from the University of Queensland, Australia, said: 'This took us by surprise. After all, people in the Comoros speak African languages and they don't look like they have Southeast Asian ancestry in the way that populations on Madagascar do. What was amazing to us was the stark contrast that emerged between the crops on the Eastern African coast and the offshore islands versus those on Madagascar, but also the Comoros.'

Dr Boivin added: 'When we started looking more closely into research that has been carried out on Comorian languages, we were able to find numerous esteemed linguists who had argued for the exact thing we seemed to seeing in the Comorian archaeological record: a settlement by people from Southeast Asia. So we've been able to not only to show for the first time an archaeological signature of Austronesians, we've also shown that it seems to extend beyond Madagascar. This is really exciting, and highlights how much we still have to learn about this fascinating migration.'

*The paper, 'Ancient crops provide first archaeological signature of the westward Austronesian expansion', is published in the journal PNAS (Proceedings of the National Academy of Sciences) and embargoed until Monday 30 May, at 3pm US Eastern Time.

*Images are available on request. 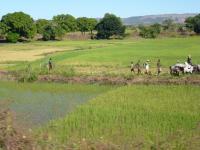