EVANSTON, Ill. -- A new study from Northwestern University and the Chicago Botanic Garden has found that climate change may drive local extinction of mason bees in Arizona and other naturally warm climates.

In a two-year, in situ field experiment that altered the temperature of the bees' nests to simulate a warmer, future climate, 35 percent of bees died in the first year and 70 percent died in the second year. This is compared to a 1-2 percent mortality rate in the control group.

"The projected temperatures appear to be pushing this species up against its physiological limits," said Northwestern's Paul CaraDonna, who led the research. "This is evidence that we might see local extinction in the warmer parts of this species' range, which is pretty sobering."

The study will publish online on Thursday, June 28 in the British Ecological Society's journal Functional Ecology. CaraDonna is an assistant professor of instruction in the Program in Plant Biology and Conservation in Northwestern's Weinberg College of Arts and Sciences and a research scientist at the Chicago Botanic Garden.

This species of mason bee (Osmia ribifloris), often called the "blueberry mason bee," is native to the western United States and northern Mexico. This particular type of solitary bee builds nests inside of holes and cracks in dead tree stumps. Yet, as a primary pollinator of manzanita shrubs in the wild, this little-studied bee may have a big effect on its ecosystem.

"Native pollinators are a really important part of what makes nature run smoothly," said CaraDonna, an expert on pollination ecology. "It's estimated that close to 90 percent of all flowering plants benefit from animal pollination. That ends up at around more than 300,000 plant species worldwide."

To study how climate change affects mason bees, CaraDonna's team set up three types of nesting environments in Arizona's Santa Catalina Mountains, where the bees thrive. The team manipulated the temperatures of the nests by painting them to simulate past, present and future climates. The team painted a third of the nests black to absorb more radiant heat, thus simulating a future climate predicted for the years 2040 to 2099. By painting another third with a white, reflective, cooling treatment, the team sent that third of the nests back in time to a climate similar to that of the 1950s. As a control, the team painted the final third nests with a transparent paint, leaving their natural wood color for a control group. The experiment included 90 nests total, each housing anywhere from 2 to 15 bees.

"It's pretty low-tech, but it works," CaraDonna said of the experiment. "The field site is so remote that something more high-tech with solar panels or a power source was out of the question."

CaraDonna ran the experiment twice during two back-to-back seasons. Bees experienced the altered environments from early in larval development all the way through metamorphosis and adult diapause, which is a term to describe insect hibernation. CaraDonna noted that the bees in nests simulating past and current climates woke up from diapause and emerged in February, which is normal.

"This suggests that they are responding to a stressful environment," CaraDonna said. "Because their emergence times are altered, they now potentially have fewer floral resources available to them as a population, and it might be a lot harder to find mates."

CaraDonna also noted that the bees in the warmer nests emerged with smaller bodies and lower body fat. He thinks this is because the warmer temperatures cause the bees' metabolisms to increase during diapause, so they burn through fat reserves more quickly, which can be problematic in nature once they emerge.

"For insects, size is a big deal," he said. "Bigger is usually better. It means you have greater energy stores, which essentially means you can weather more storms. As a bee, that means you are likely able to reproduce more, which has implications for the stability of the population."

CaraDonna believes these mason bees could move farther up the mountains to cooler climates in the future, but this will take them away from the manzanita plants, which are their main source of food. This would not only have consequences for the bees but also for the plants that rely on them for pollination.

"This mason bee is probably one of the best pollinators for this plant species, so if you take away the pollinator, you might take away the plant in the longer term," he said. "We need to understand how nature works and see how it responds to important sources of variation. Otherwise, we don't have the ability to keep it safe."

The study, "Experimental warming in the field delays phenology and reduces body mass, fat content and survival: Implications for the persistence of a pollinator under climate change," was supported by the National Science Foundation (award number DGE 11-43953) and the Danish National Research Foundation. Amy Iler, a research scientist at the Chicago Botanic Garden and adjunct assistant professor in Northwestern's Program in Plant Biology and Conservation, co-authored the paper. 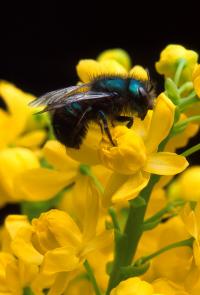