Scientists have provided the first evidence to show that eradicating rats from tropical islands effects not just the biodiversity on the islands, but also the fragile coral seas that surround them.

The new study led by scientists at Lancaster University and published in the journal Current Biology shows that critical cycles of seabird nutrients flowing to coral reefs are re-established within relatively short time periods after rats are removed - even around islands that have been infested for hundreds of years.

The findings offer encouragement that rat eradication can benefit coral reefs, because these nutrient flows can bolster the health of delicate coral reef ecosystems and may improve their chances of rebounding between climate disturbance events.

Seabirds are a critically important distributor of nutrients for island and marine environments. They feed on fish often in the open ocean far from islands, and then return to islands to roost - depositing nitrogen-rich nutrients on the island in the form of guano - or poo. Some of the guano is then leached off the islands by rain and into the surrounding seas where the nitrogen fertilises corals and other marine species such as algae and sponges, boosting the food-chain.

However, over the last several centuries people introduced rats to many tropical islands through settlement, sailing between islands and shipwrecks. Rats are a very damaging invasive species, consuming the seeds of many plants, and devastating bird populations as they eat eggs, chicks, and even adults of the smallest seabird species.

Previous studies by scientists from the same research team revealed that islands with rat infestations had much smaller seabird populations than islands without rats, and as a result, there was much less nitrogen on the islands, and in the surrounding marine environments. This results in significant knock-on negative effects with less reef fish biomass, reduced ecosystem functioning, and slower coral growth on adjacent coral reefs.

In this latest study the researchers looked at 20 islands in the central and western Indian Ocean, including the Chagos Archipelago and the Scattered islands. These remote and protected islands provided an ideal testbed as they contain islands with varying rat histories.

By comparing rat infested islands with islands where invasive rat populations have been eradicated, and islands that have never had rats, they found that the greatest number of seabirds, and the nutrients they provide to island and marine ecosystems were at the islands where rats have never been introduced. Those islands that have existing rat infestations had the fewest seabirds, and seabird-derived nutrients. Importantly, they found islands where rats had been eradicated were between the two.

"Rats were eradicated on Tromelin in 2005," said Matthieu Le Corre of the Universite de La Reunion who was part of the research team. "Since then there has been an eight-fold increase in seabirds, and six species that were locally extinct because of the rats have restarted to breed after rat eradication. On Île du Lys, where rats were eradicated in 2003, surveys show there has been a ten-fold increase in seabirds since."

The researchers, testing fish and algae, also found increased measurements of seabird-derived nitrogen in the marine ecosystems surrounding these islands.

These results show that even after hundreds of years of rat infestations, the islands and the surrounding marine ecosystems can start to recover within 16 years of rat eradication.

Dr Casey Benkwitt, of Lancaster University and lead author of the research, said: "We know that rats are devastating for island seabird populations, and that the loss of these birds from islands is harmful to the surrounding coral reef ecosystems. However, we needed to test whether removing the rats from islands could help these important nutrient cycles return, and if so, how quickly and how far the benefits would spread onto fragile coral reefs.

"Our study shows the first evidence that rat eradication programmes can indeed be an important tool in helping restore these vital seabird-led nutrient cycles not just on tropical islands themselves, but also in their surrounding seas - and that they can recover within relatively short timeframes, which is very encouraging."

However, not all of the marine ecosystem functions around islands that have had rats eradicated have improved. One important measure, that of the growth and size of coral reef fish, was not higher around these islands. Fish do grow faster adjacent to islands that have never had rats present, so these benefits may take longer to emerge following rat eradication.

The findings will help guide management and restoration efforts for islands and coral reef environments. The researchers believe that by combining rat eradication programmes with other restoration strategies it could be possible to speed-up the recovery of seabird populations, and their benefits to surrounding marine environments.

Professor Nick Graham, of Lancaster University and Principal Investigator of the research, said: "This study adds to the weight of evidence suggesting rat eradication can have substantial conservation benefits to tropical island and adjacent marine ecosystems. The nutrient cycles that returning seabirds bring can bolster coral and fish assemblages. With climate impacts severely impacting coral reefs, management actions to boost the ecosystem are incredibly important."

The paper's authors are: Cassandra Benkwitt, Rachel Gunn and Nick Graham of Lancaster University; Matthieu Le Corre, of Université de La Reunion; Peter Carr of the ZSL (Zoological Society of London) and the University of Exeter. 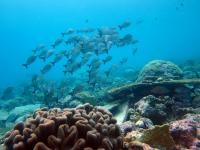 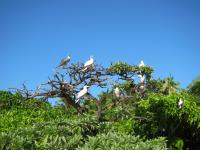