Researchers with NASA's Operation IceBridge have completed another successful Arctic field campaign. On May 23, NASA's P-3 research aircraft left Thule Air Base, Greenland, and returned to Wallops Flight Facility in Virginia marking the end of 11 weeks of polar research.

Early in each campaign IceBridge spends a week in Alaska to survey sea ice north of Alaska. In addition, researchers study sea ice conditions across the entire Arctic Basin traveling from Thule to Fairbanks and back.

IceBridge's sea ice measurements help researchers understand how Arctic ice is changing, particularly those forecasting how sea ice coverage will change over the summer. To meet the need for timely ice thickness measurements IceBridge releases a quick look data product before the end of the campaign that gives an almost real-time look at sea ice.

This quick look product first debuted in 2012 and is joined this year by a new data product that uses IceBridge data together with measurements from the European Space Agency's satellite, CryoSat-2, to show ice thickness across the entire Arctic Ocean. The new CryoSat-2 data product compares well with IceBridge's quick look data, which Nathan Kurtz, sea ice scientist at NASA's Goddard Space Flight Center in Greenbelt, Maryland, said is nice to see.

Looking at the Land

After surveying sea ice for four weeks, IceBridge turned its attention to land ice southern half of Greenland, moving its base of operations to Kangerlussuaq. From there researchers spent three weeks surveying the ice sheet and coastal glaciers such as Jakobshavn Glacier, the most rapidly-changing ice stream in Greenland.

Nearly half of the surveys flown from Kangerlussuaq fell into a new category known as baseline missions, which are to be flown each year. The seven baseline missions covered areas experiencing dramatic change, such as Helheim and Kangerdlugssuaq glaciers on Greenland's east coast and the Jakobshavn region in the west. These flights were joined by two surveys designed around future ICESat-2 ground tracks, giving researchers measurements to help connect datasets from IceBridge, ICESat and ICESat-2.

The Helheim and Kangerdlugssuaq baseline flight was of keen interest because of prevailing weather conditions in the area, so mission planners kept an eye on the region. "We tried it to get it every day for three weeks and never saw a good opportunity to go for it," said John Sonntag, Airborne Topographic Mapper senior scientist, at NASA Goddard.

But on the last day of the Kangerlussuaq deployment, the forecast showed that cloudy conditions in the southern part of the survey area would clear for a few hours. By rearranging the flight plan the team was able to move arrive in those areas as they cleared and collect data over the entire flight line.

While in Kangerlussuaq, IceBridge also hosted three high school science teachers – one each from the United States, Greenland and Denmark – who joined the team to get a closer look at IceBridge's science. This was the third year that IceBridge has provided a research experience for teachers, who plan to take what they learned back to their students.

Russell Hood, a physics teacher from Anchorage, Alaska, came to Kangerlussuaq through the National Science Foundation-funded PolarTREC program, an education organization that teams qualified teachers with scientists doing research in the Arctic and Antarctic. PolarTREC strives to improve science education by giving teachers a first-hand look at real-life research and promoting collaboration between scientists and educators.

Since returning from Greenland, Hood has been busy preparing for the end of the semester and is currently planning future classroom activities based on his experiences with IceBridge. "I am planning some lessons that begin with an overview of IceBridge and end with my students using archived data to research and draw some conclusions," said Hood.

On Apr. 25 the IceBridge team packed up and returned to Thule for the last four weeks of the campaign, this time focusing mostly on land ice. During this span the team collected data on coastal glaciers in northern Greenland and the Canadian Arctic and parts of the Greenland Ice Sheet, with one flight to measure sea ice near the North Pole.

IceBridge flew several repeats of previous missions – such as surveys of Petermann and Humboldt glaciers – which is vital for understanding long-term changes to ice sheets and glaciers. Researchers also carried out new missions, measuring bedrock shape in northeast Greenland and covering a new set of lines to be measured by ICESat-2.

With 46 survey flights in the books, IceBridge returned to Wallops where instrument and aircraft technicians started removing instruments from the NASA P-3. Researchers will now spend the next few months processing data from the campaign and mission planners will start getting ready for IceBridge's future campaigns.

In late August, a new airborne mission known as the Arctic Radiation - IceBridge Sea and Ice Experiment, or ARISE, will begin. ARISE will use a large suite of instruments to collect data on the atmosphere and on Arctic sea ice. In October, IceBridge will return to Punta Arenas, Chile, to survey Antarctic ice, and next March the mission will return to Greenland, this time aboard NASA's C-130 aircraft. 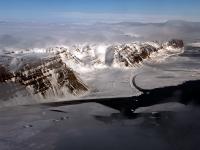 Mountains and Sea Ice Near Thule Air Base, Greenland