The research, published today in the scientific journal BMC Ecology, affirms what Chester Starr, an elder from the Heiltsuk First Nation on BC's remote west coast, and his people have always known: 'Timber Wolves' occupy the mainland of the British Columbia coast and 'Coastal Wolves' live on the nearby islands. Starr's insight provided motivation for the study.

"What makes this study special is the fact that differentiation is not supposed to occur on such a small-scale," says Navid, who graduated from the Faculty of Environmental Design, Environmental Science Program in 2009. "Wolves are highly mobile animals, capable of crossing many types of natural barriers, including small bodies of water. We did not expect to uncover a genetic gradient in an area that is only 2,000 square kilometres and relatively permeable to wolf movement."

The authors attribute the observed genetic differentiation to the profoundly different ecological environments. Coastal islands offer wolves more marine-based foods, such as salmon and marine mammals—preferences that are passed on from generation to generation. Over time, coastal wolves bred more frequently with one another and less frequently with their deer-loving relatives on the mainland.

Navid analyzed DNA samples from wolf scats collected in the field as part of her masters' thesis in the Faculty of Environmental Design.

The discovery also emphasizes the importance of incorporating traditional ecological perspectives with empirical scientific methods. "An emerging mutual recognition is that although indigenous and scientific approaches constitute different paths to knowledge, they are rooted in the same reality and provide complementary information," says co-author Paul Paquet, an adjunct professor at the University of Calgary.

These approaches are useful in addressing today's conservation challenges and opportunities. In this particular study, efforts at landscape conservation can be informed by detailed information about the habits of animals across space.

Wolves in wolves' clothing not all the same 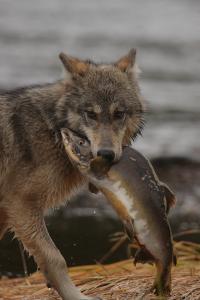 Genetic Differences among Wolves in Coastal British Columbia (2 of 2)