Cambridge, Mass. – July 28, 2009 – As the climate warms in the coming decades, atmospheric scientists at Harvard's School of Engineering and Applied Sciences (SEAS) and their colleagues expect that the frequency of wildfires will increase in many regions. The spike in the number of fires could also adversely affect air quality due to the greater presence of smoke.

The study, led by SEAS Senior Research Fellow Jennifer Logan, was published in the June 18th issue of Journal of Geophysical Research. In their pioneering work, Logan and her collaborators investigated the consequences of climate change on future forest fires and on air quality in the western United States. Previous studies have probed the links between climate change and fire severity in the West and elsewhere. The Harvard study represents the first attempt to quantify the impact of future wildfires on the air we breathe.

"Warmer temperatures can dry out underbrush, leading to a more serious conflagration once a fire is started by lightening or human activity," says Logan. "Because smoke and other particles from fires adversely affect air quality, an increase in wildfires could have large impacts on human health."

Using a series of models, the scientists predict that the geographic area typically burned by wildfires in the western United States could increase by about 50% by the 2050s due mainly to rising temperatures. The greatest increases in area burned (75-175%) would occur in the forests of the Pacific Northwest and the Rocky Mountains. In addition, because of extra burning throughout the western U.S., one important type of smoke particle, organic carbon aerosols, would increase, on average, by about 40 percent during the roughly half-century period.

To conduct the research, the team first examined a 25-year record of observed meteorology and fire statistics to identify those meteorological factors that could best predict area burned for each ecosystem in the western United States. To see how these meteorological factors would change in the future, they then next ran a global climate model out to 2055, following the A1B scenario in greenhouse gas emissions. This scenario, one of several devised by the Intergovernmental Panel on Climate Change, describes a future world with rapid economic growth and balanced energy generation from fossil and alternative fuels. Relative to the other scenarios, it leads to a moderate warming of the earth's average surface temperature, about 3oF (1.6 oC) by 2050.

"By hypothesizing that the same relationships between meteorology and area burned still hold in the future, we then could predict wildfire activity and emissions from 2000 to the 2050's," explains Logan.

As a last step, the researchers used an atmospheric chemistry model to understand how the change in wildfire activity would affect air quality. This model, combining their predictions of areas burned with 2050's meteorology data, shows the emissions and fate of the smoke and other particles emitted by the future wildfires. The resulting diminished air quality could lead to smoggier skies and adversely affect those suffering from lung and heart conditions such as asthma and chronic bronchitis.

The authors expect the work will help policymakers gauge the "climate penalty" related to ongoing efforts to reduce air pollution across the United States. In addition, the study underscores the need for a vigorous fire management plan.

The team next plans to focus on future wildfires and air quality over the densely populated areas in California and in the southwest United States. 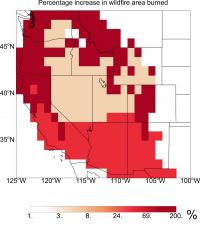 Percentage Increase in Area Burned by Wildfires in the western US