Earlier this year, a team from Japan's National Institute of Polar Research (NIPR), National Museum of Nature and Science (NMNS), and Kochi University (KU) set out to collect specimens of sea worm near the South Orkney Islands, a remote region of the Southern Ocean about 400 miles northeast of the tip of the Antarctic Peninsula.

The researchers collected material from the sea floor at depths of 2,036 to 2,479 meters, a segment that falls within what oceanographers call the bathyal zone (1,000 to 4,000 meters deep). Amid the collected seafloor material, they observed a new Acrocirridae, a family that now includes 43 species of worm. The team, led by Naoto Jimi, a postdoctoral fellow at NIPR, published their findings in Biodiversity Data Journal on June 8, 2020.

The team’s process involved extracting rock and silt sediments using a sieve with seawater and fixing them in an ethanol solution. They observed a variety of captured specimens under a microscope and photographed them with a high-resolution digital SLR. The newly-identified worm, one of a species belonging to the genus Flabelligena, is named “Flabelligena hakuhoae”.

Flabelligena falls within the broad class of worms called polychaetes, which contains over 10,000 species. "Polychaetes are one of the most diverse groups in marine benthic animals and well-studied in the Southern Ocean," Jimi said. "Many researchers have investigated the Southern Ocean, but our knowledge of small deep-sea invertebrates is still quite limited."

Jimi and his NIPR, NMNS, KU co-authors described the Flabelligena hakuhoae having a "minute" body, body papillae (small rounded protuberance), 3 pairs of branchiae (gill-like organs), absence of eyes, and a pair of frontal palps. Its body is about 1.8 centimeters long and 1 millimeter wide and rounded on both ends.

Jimi and his team hope to discover more species and continue to learn more about the vast Southern Ocean. "This is just the first step in understanding the biodiversity of the Antarctic Ocean," Jimi said. "The next step is to understand the polychaete diversity around Syowa Station. 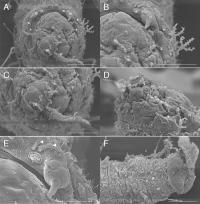