Researchers use seismic sensors to map the dynamics of water flow beneath a glacier. Subglacial water flow is known to strongly influence glacier movement, which, in turn, has a direct effect on sea level rise. However, the relationship between subglacial water flow and glacier movement is unclear, due to a lack of observational data. Ugo Nanni and colleagues deployed a dense array of 98 seismic sensors on the surface of the Argentière glacier in the French Alps and recorded for 1 month seismic noise generated by subglacial water flow during the onset of the 2018 melt season, producing a 2D map of the subglacial drainage system and observing the evolution of water flows over time. Early in the observation period, the results revealed a water flow system dominated by multiple subglacial cavities, which produced higher water pressure at the glacier's base leading to accelerated glacier movement. The seismic data showed a transition to a more efficient channel-like drainage system over time, resulting in decreased basal water pressure and a slight deceleration of the glacier. According to the authors, similar seismic monitoring systems could be adapted to other glaciers and ice sheets to identify locations that are particularly sensitive to the meltwater increases expected from climate change. 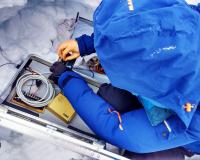 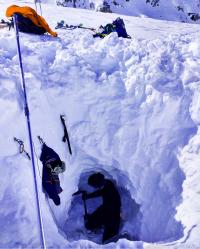