A University of Colorado at Boulder team excavating an ancient Maya village in El Salvador buried by a volcanic eruption 1,400 years ago has discovered an ancient field of manioc, the first evidence for cultivation of the calorie-rich tuber in the New World.

The manioc field was discovered under roughly 10 feet of ash, said CU-Boulder anthropology Professor Payson Sheets, who has been directing the excavation of the ancient village of Ceren since its discovery in 1978. Considered the best-preserved ancient village in Latin America, Ceren's buildings, artifacts and landscape were frozen in time by the sudden eruption of the nearby Loma Caldera volcano about 600 A.D., providing a unique window on the everyday lives of prehistoric Mayan farmers.

The discovery marks the first time manioc cultivation has been discovered at an archaeological site anywhere in the Americas, said Sheets. The National Geographic Society funded the 2007 CU-Boulder research effort at Ceren, the most recent of five research grants made by NGS to the ongoing excavations by Sheets and his students.

"We have long wondered what else the prehistoric Mayan people were growing and eating besides corn and beans, so finding this field was a jackpot of sorts for us," he said. "Manioc's extraordinary productivity may help explain how the Classic Maya at huge sites like Tikal in Guatemala and Copan in Honduras supported such dense populations."

Evidence indicated the manioc bushes had just been cut down, most of the tubers harvested and the beds replanted with manioc stalks placed horizontally in the soil to regenerate bushes for the next cycle of growth, he said. The presence of volcanic ash just underneath hand-shaped dirt overhangs in the beds indicates the stalks were planted "just hours before the eruption," he said.

"What we essentially found was a freshly planted manioc field that was 1,400 years old," said Sheets. "Once again, we felt like we were right on the heels of these ancient people because of the exquisite preservation provided by the volcanic ash."

Each hand-shaped planting bed was about three feet wide and two feet high -- about 10 times larger than traditional planting beds for corn -- although the lengths of the rows are still unknown, he said. Each manioc stalk, or cutting, had been carefully placed in the ground with a growth "node" pointing toward the surface to generate a new bush and several nodes pointing down to generate the edible tubers and regular roots, he said.

Archaeologists had suspected ancient Mayans had cultivated and consumed manioc for its high-energy value, he said. Also known as cassava, manioc provides one of the highest yields of food energy per acre per day of any cultivated crop in the world.

The CU-Boulder team is working with scientists at the Smithsonian Institution in Washington, D.C., to develop new soil-analysis techniques to detect starch grains like those from manioc that will work at a wide range of archaeological sites, said Sheets.

"We don't want to find out that Ceren was unique in manioc cultivation," said Sheets. "We hope archaeologists eventually find evidence for this kind of activity at sites throughout the region. From an archaeological standpoint, there are few things as important as discovering the sources of day-to-day subsistence for ancient cultures."

Sheets and his colleagues previously determined the eruption at Ceren occurred on an early August evening because of the height of corn stalks and the fact that the farming implements had been brought inside but the sleeping mats had not yet been rolled out.

Thus far 12 buildings at Ceren -- believed to have been home to several hundred people -- have been excavated, including living quarters, storehouses, workshops, kitchens, religious buildings and a community sauna. Several dozen other structures located with ground-penetrating radar remain buried under up to 17 feet of ash, said Sheets.

Although the absence of human remains at Ceren initially puzzled scientists, the 1993 discovery that an earthquake rocked the site just prior to the eruption indicated the villagers might have had just enough warning to flee. "They did not even have time to remove their most valued belongings," said Sheets.

Preservation of organic materials at Ceren -- including thatched roofs, house beams, woven baskets, cloth and grain caches -- has been deemed superior to the organic preservation at the Italian site of Pompeii, by archaeologists and vulcanologists who have visited the Salvadoran site from around the world.

Located 15 miles west of San Salvador, the Ceren project involves scores of experts from the United States and El Salvador, including dozens of CU students and faculty. Past research at Ceren also has been funded by the National Science Foundation.

A podcast with Sheets on the ancient manioc plantation discovery at Ceren can be heard on the Web at: http://www.colorado.edu/news/podcasts/. 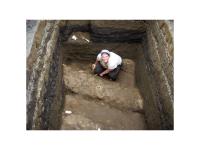