It may be possible in the future to use information technology where electron spin is used to store, process and transfer information in quantum computers. It has long been the goal of scientists to be able to use spin-based quantum information technology at room temperature. A team of researchers from Sweden, Finland and Japan have now constructed a semiconductor component in which information can be efficiently exchanged between electron spin and light at room temperature and above. The new method is described in an article published in Nature Photonics.

It is well known that electrons have a negative charge, and they also have another property, namely spin. The latter may prove instrumental in the advance of information technology. To put it simply, we can imagine the electron rotating around its own axis, similar to the way in which the Earth rotates around its own axis. Spintronics - a promising candidate for future information technology - uses this quantum property of electrons to store, process and transfer information. This brings important benefits, such as higher speed and lower energy consumption than traditional electronics.

Developments in spintronics in recent decades have been based on the use of metals, and these have been highly significant for the possibility of storing large amounts of data. There would, however, be several advantages in using spintronics based on semiconductors, in the same way that semiconductors form the backbone of today's electronics and photonics.

"One important advantage of spintronics based on semiconductors is the possibility to convert the information that is represented by the spin state and transfer it to light, and vice versa. The technology is known as opto-spintronics. It would make it possible to integrate information processing and storage based on spin with information transfer through light", says Weimin Chen, professor at Linköping University, Sweden, who led the project.

As electronics used today operates at room temperature and above, a serious problem in the development of spintronics has been that electrons tend to switch and randomise their direction of spin when the temperature rises. This means that the information coded by the electron spin states is lost or becomes ambiguous. It is thus a necessary condition for the development of semiconductor-based spintronics that we can orient essentially all electrons to the same spin state and maintain it, in other words that they are spin polarised, at room temperature and higher temperatures. Previous research has achieved a highest electron spin polarisation of around 60% at room temperature, untenable for large-scale practical applications.

Researchers at Linköping University, Tampere University and Hokkaido University have now achieved an electron spin polarisation at room temperature greater than 90%. The spin polarisation remains at a high level even up to 110 °C. This technological advance, which is described in Nature Photonics, is based on an opto-spintronic nanostructure that the researchers have constructed from layers of different semiconductor materials. It contains nanoscale regions called quantum dots. Each quantum dot is around 10,000 times smaller than the thickness of a human hair. When a spin polarised electron impinges on a quantum dot, it emits light - to be more precise, it emits a single photon with a state (angular momentum) determined by the electron spin. Thus, quantum dots are considered to have a great potential as an interface to transfer information between electron spin and light, as will be necessary in spintronics, photonics and quantum computing. In the newly published study, the scientists show that it is possible to use an adjacent spin filter to control the electron spin of the quantum dots remotely, and at room temperature.

"We are very happy that our long-term efforts to increase the expertise required to fabricate highly-controlled N-containing semiconductors is defining a new frontier in spintronics. So far, we have had a good level of success when using such materials for optoelectronics devices, most recently in high-efficiency solar-cells and laser diodes. Now we are looking forward to continuing this work and to unite photonics and spintronics, using a common platform for light-based and spin-based quantum technology", says Professor Mircea Guina, head of the research team at Tampere University in Finland.

Financial support for the research has been granted by, among other bodies, the Swedish Research Council, the Swedish Foundation for International Cooperation in Research and Higher Education (STINT), the Swedish Government Strategic Research Area in Materials Science on Functional Materials at Linköping University, the European Research Council ERC, the Academy of Finland, and the Japan Society for the Promotion of Science. 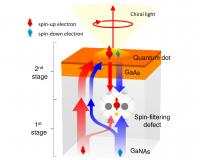 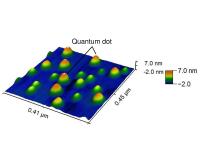