Modern, machine-friendly agriculture is dominated by monocultures. One single cultivar - one genotype of a crop species - is cultivated on large areas. Favored cultivars are optimized for high yields and often contain only few natural plant defense compounds. Unfortunately, these extensive monocultures of identical plants can become an ecological wasteland and cause permanent damage to the ecosystem, especially when combined with blanket application of fertilizer and pesticides. Scientists at the Max Planck Institute for Chemical Ecology in Jena, Germany, demonstrated in field experiments with Nicotiana attenuata plants that it is sufficient to alter the expression of certain defense genes in individual plants to protect the whole population and to alter the diversity of the ecosystem as a whole. (eLife, April 2015)

The term biodiversity is often used as a synonym for species diversity. However, this is not entirely correct, because apart from the diversity of different plant and animal species the term also includes variations within the same species. How well a plant develops, how it adapts to its environment or copes with climatic conditions and natural enemies, depends on its genes. What a particular gene does in a plant, on the other hand, depends on where and how the plant lives: isolated, in dense populations, in the center or the edge of a population, in what environment. If we bear in mind that plants may have about 30,000 genes, which can be expressed quite differently depending on time and location or other varying conditions, it becomes clear that an uncountable number of combinations is possible just as a result of variable gene expression, even within one single species.

The project group "Ecological functions of plant secondary metabolites" headed by Meredith Schuman, which is associated with the German Centre for Integrative Biodiversity (iDiv) Halle-Jena-Leipzig, is studying the diversity of these combinations in functionally different, but genetically near-identical plants. The researchers use the tobacco plant Nicotiana attenuata. This wild tobacco species, also called coyote tobacco, employs surprisingly versatile and sophisticated defense mechanisms to fend off herbivores. Large parts of its genome have already been sequenced.

For their experiments Meredith Schuman and her colleagues used tobacco plants which had been altered in the expression of certain defense genes, namely LOX2, LOX3 and TPS10. These three genes mediate important direct (LOX3) and indirect defenses (LOX2, LOX3, and TPS10). By silencing or over-expressing these genes in different combinations the scientists produced plants that were genetically identical except for the manipulation of those specific genes, and differed considerably with regard to an important ecological function: the ability to defend themselves.

Indirect defenses of tobacco plants include volatiles which function as messenger molecules by informing predators about the presence of herbivores. Predators can then find their prey more easily and plants can get rid of their enemies. These odor molecules can travel long distances, which is why the whole neighborhood might benefit from the attracted predators, even if only one single plant produces the volatiles. "Variations in single plant genes can have large effects for whole plant populations when those genes themselves have important ecological functions", Meredith Schuman explains.

Together with wild-type tobacco plants, plants which had been altered in the expression of the three defense genes were planted out in small populations in their natural habitat in the Great Basin Desert in Utah, USA, where they were monitored over a period of time. The researchers found that the populations of herbivores and their natural enemies changed in the neighborhood and on plants, depending on the combination of functionally diverse plants. However, changes were often observed in whole populations, not on individual plants.

One of the observations the scientists made came as a real surprise: In the vicinity of TPS10-expressing plants, which produce the volatile trans-α-bergamotene (TAB) that attracts predators, infestation of plants by the stem-boring weevil Trichobaris mucorea - whose larvae live hidden from predators inside stems - more than doubled. "This result shows how these info molecules can be double-edged swords", says Ian Baldwin, director of the Department of Molecular Ecology and a pioneer of ecological genetics. "They benefit plants when they attract predators, but they are also a detriment when the odor brings herbivores like the weevil on the scene. This is why a plant only releases the chemical cry for help when it is attacked by the herbivore it wants to have killed".

According to the scientists, functional diversity based on variation in gene expression can be compared to species diversity in certain habitats as far as ecosystem services are concerned. "Functional diversity means nothing else than the ability of various individuals of one species to perform different ecological tasks. Having everyone doing the same thing is rarely the best way for a species to maximize its ability to produce successful grandchildren, or in other words, it is Darwinian fitness", explains Ian Baldwin.

The researchers even go one step further by indicating that their findings can be utilized in modern agriculture. "Varying the expression of just a few genes in just a few individuals can have large protective effects for the whole field", says Meredith Schuman. "We hereby suggest an economically tenable way to recover some of the lost benefits of biodiversity for the vast expanses of land which have already been converted from natural, biodiverse habitats into agricultural monocultures".

According to estimates of the United Nations, the world's current population of over 7.2 billion people will have reached 10 billion by the end of the century, and all these people need to be fed. The demand for food will increase constantly with the growing population. Basic knowledge derived from research in molecular plant ecology may contribute to a more sustainable use of agricultural land and to a better adaptation of crops to the given natural environments. [AO]

Diversity in a monoculture 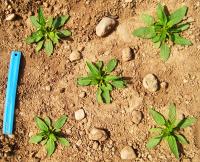